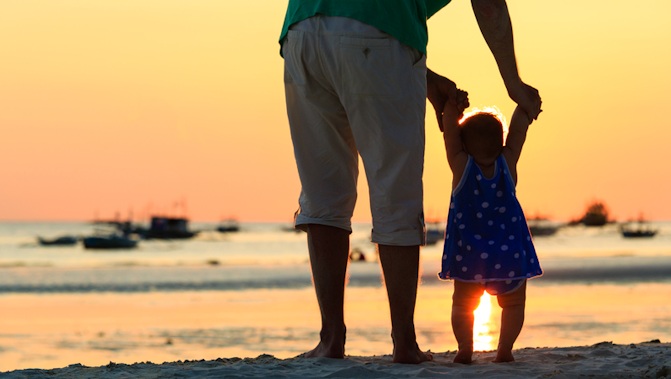 Spiritual Fathers are men who pray and sacrifice for little lives they cannot yet see — the most innocent and helpless creatures on Earth, so weak they don’t yet have a voice.

Men are called to save these little ones by standing up to a culture of death and a society that discards them — with vigils on cold nights and hot days amidst scornful looks, degrading gestures, spit, and insults as their pay and reward.

These men stand against the darkness that pushes the abortion and contraception mentality that debilitates the hearts of women, paralyzes men, and destroys families. Our culture emasculates men, tears their right of fatherhood from their identity, and degrades them on TV and in the workplace.

What do you who live outside the womb have in common with the unborn living inside the womb? You both have active brain waves and beating hearts. You both depend on nourishment.  And, if the unborn child has been in the womb at least five to six months – most likely you both have the capacity to experience pain.

Would you be willing, for one chance, to make a stand right now for the freedom of the unborn to live against the tyranny of Planned Parenthood, the abortionists, and the culture of death?

Would you plead their cause of existence in a world that reduces them to a mere mass of tissue instead of the awesome gift and profound mystery of their lives beginning at conception? Could you hold back the wrath of the profitable abortion industry, with Planned Parenthood at its head, or even take it onto yourself just so one of these precious little ones could be spared?

Many say, It’s better to abort children than let them suffer a future of poverty or disabilities from birth defects like Down syndrome. Hopefully, with our culture, you don’t get that unlucky roll, because it’s a death sentence; some studies estimate that 90 percent of babies prenatally diagnosed with Down syndrome are aborted. Sorry, Corky; you’re just not good enough. We’d rather have the next quarterback or prom queen instead.

Don’t apologize for being a man reclaiming your masculinity, because it doesn’t matter what others think of you. What matters is that every unborn child has their fair shot to rise from the ashes of poverty and overcome disabilities and life’s challenges we all must face and display their love and talents. Who are we to deny their unique and un-repeatable life that chance? How do we know what life has in store for them with all its joys and trials, losses and comebacks? There’re many who would love that child with all their poverties and defects, and wait hopefully to adopt them.

Some say, “Why should you care about the unborn? You’re a man. It’s a woman’s body.” Because every man has innate desires and paternal instincts — it’s simply his nature. And by the way, he was made to stand up to protect women, children, and the defenseless unborn.

But our world continues to tell men they’re not protectors and should remain passive on the sidelines. Horse-hockey. Get in the game and join all the spiritual mothers out there. Radically go against this cultural train even through all types of weather, trials, media blackouts, and storms. Being passionate about the pro-life movement can lead to a greater appreciation for one’s own life.

Those who choose abortion or allow it to happen need God’s mercy above all else — and they can easily find it if only they seek it!

Stand up for life, and one day that unborn child will thank you for it. Wouldn’t you want someone to take a stand for you? Wouldn’t you want your shot to show what you can do with the life that was freely given to you?