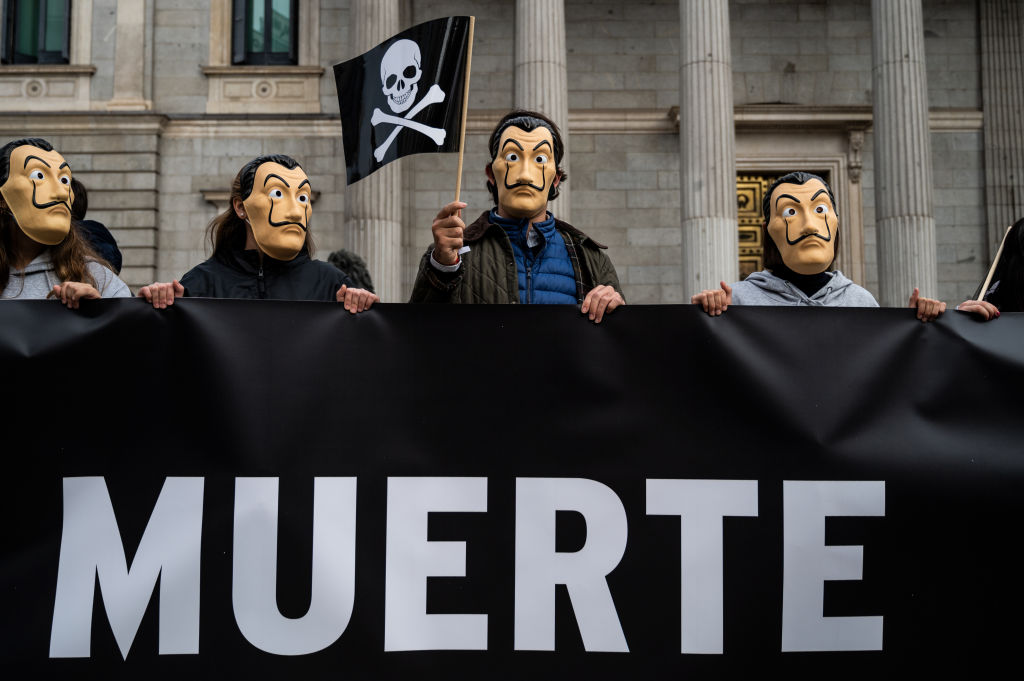 On Thursday, members of Spain’s Parliament voted in favor of legalizing euthanasia, taking the country one step closer to approving doctor-facilitated death. The bill passed in 198-138 vote and is now on its way to the Senate, where it is expected to pass.

According to the Associated Press, the bill, which “will allow physician-assisted suicide and euthanasia for long-suffering patients of incurable diseases or unbearable permanent conditions,” was backed by a left-wing coalition, while the Popular and Vox parties voted against it. Spanish Health Minister Salvador Illa told lawmakers, “As a society, we cannot remain impassive when faced with the intolerable pain that many people suffer.”

Protestors gathered outside of Parliament, waving skull-and-crossbones flags with signs reading “muerte,” or death. Many opposed to the euthanasia bill wore masks of Salvador Dali, the famous Spanish artist. In his 70s, Dali was stricken with depression, drug addiction, and tremors similar to Parkinson’s disease. A fire broke out in his apartment in 1984, causing severe burns. After his wife, Gala, died, Dali attempted suicide by refusing to eat or drink anything. His suicide attempt was ultimately unsuccessful, and he died of heart failure in 1988.

If the bill passes, it could go into effect as early as the spring, and would allow patients to choose between euthanasia or assisted suicide. In euthanasia, the doctor actively kills the patient, while in assisted suicide, the doctor doles out the fatal drug cocktail and the patient takes the deadly pills on their own. Lourdes Méndez, a member of the Vox party, slammed the bill as “signing death sentences for the weakest.”

READ: SHOCK: Netherlands considers euthanasia for children of all ages

Patients will need to be given full information about their condition and any alternatives to suicide. They will need to make the request in writing, twice, 15 days apart. The bill allows for conscientious objections from doctors who don’t want to participate in killing their patients.

The Episcopal Conference of Spain, the conference of Roman Catholic bishops in the mostly-Catholic country, slammed the legislation and pointed to the failures of other countries. “The experience of the few countries where it has been legalized tells us that euthanasia incites death to the weakest,” the Church wrote in a statement. “By granting this supposed right, the person, who is experienced as a burden for the family and a social weight, feels conditioned to ask for death when a law presses him in that direction. The lack of palliative care is also an expression of social inequality. Many people die without being able to receive this care and only those who can pay for it count on them.”

It is common for countries that legalize assisted suicide to, at first, enact strict regulations on it. Yet safeguards tend to be slowly relaxed over time, until more and more people can be killed for virtually any reason. One Canadian resident is euthanized every three hours according to a government report, and 52 people died from assisted suicide in less than a year of its legalization in Australia. The Netherlands has also begun allowing doctors to forcibly euthanize patients with dementia.

Time and time again, it is made clear that euthanasia contributes to the devaluation of human life, sending a message to vulnerable citizens that their lives simply are not worth living.