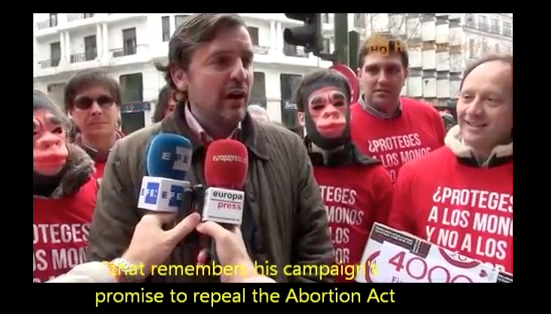 Human, however, do not receive the same protection under Spanish law.

A group of pro-life citizens dressed up as apes to celebrate the protection given them, but also to find out why humans were not given the same rights.

According to one member of the group dressed as an ape:

This morning we had to gather a group of big apes to thank Mariano Rajoy’s administration for approving a law banning experimentation on big apes.  All of my brothers in the jungle are very happy with this decision, but now we want to remind Mariano Rajoy that our human friends have rights too. … We ask Mr. Rajoy to derogate the abortion law, banning experimentation with human cells and support Motherhood’s Act.

Over 400,000 Spanish citizens have signed a petition asking for the abortion laws to be repealed. They want to hold Prime Minister Rajoy to his campaign promise to repeal the Abortion Act and protect the life of the unborn child, just like the government is protecting the life of the Great Ape.

According to Ignacio Arsuaga, president of Right to Life:

Of course if [Prime Minister Rajoy] does [protect the unborn], he will have the Spanish society in his favor who asks him [pass] a law to protect the right to life from conception, to protect the right to be a mother which protects the motherhood, and to end this bloody business which is the abortion business that produces more than 300 violent and cruel deaths every day.  That’s something that a democratic society cannot afford.