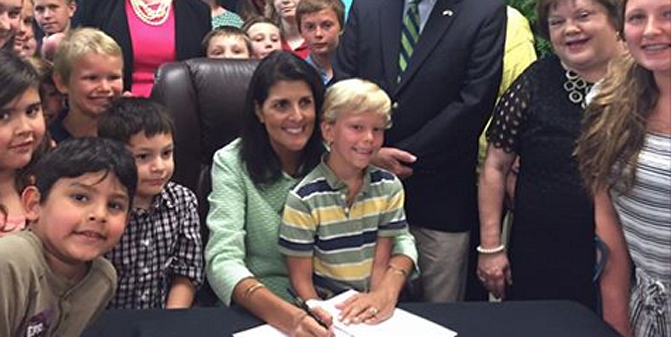 Haley actually signed the bill, which makes exceptions only for threats to a mother’s life or babies who cannot survive outside the womb, into law two weeks ago. But the ceremony, held at Hidden Treasure Christian School for children with disabilities, draws added attention to the issue.

“I’m pro-life because all of us have had experiences of what it means to have one of these special little ones in our life, to lose one, to know what it takes and how hard it is to get one,” Haley said, a reference to her husband having been adopted at birth and going through two pregnancies with complications herself.

State Representative Wendy Nanney, the bill’s sponsor, also attended, vowing to pro-lifers, “We are at 20 weeks and we’re going to keep pushing.”

This law makes South Carolina the 13th state in the country to limit abortions to five months of pregnancy. Globally, the United States is just one of seven countries to allow abortions beyond that point.