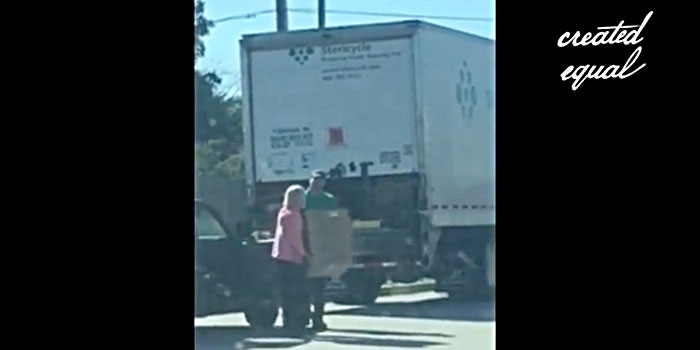 In an email this week, pro-life group Created Equal drew attention to some video captured by whistleblowers showing the apparent illegal transport of medical waste from a South Carolina abortion facility. The group stated, “On three separate occasions, video was captured showing a representative of Greenville Women’s Clinic illegally transporting dead babies in a passenger car and transferring the aborted baby body parts to a Stericycle waste truck at a local gas station.” While we cannot confirm at this time that aborted baby remains were in the medical waste container, Stericycle has been known to contract with abortion facilities to dispose of the bodies of aborted babies as medical waste:

The group noted beneath its YouTube video, “Despite dropping contracts with hundreds of abortion facilities, Stericycle is clearly not thoroughly enforcing its medical waste protocol that prohibits the transportation and disposal of fetal remains.” In the video, it appears that the driver of the Stericycle truck hands the abortion facility representative some sort of invoice or receipt, which seems to indicate that this clandestine pickup was planned.

Created Equal also notes in the email that in actuality, “five different transactions are referenced in a March 6, 2018 Notice of Alleged Violations from the S.C. Department of Health and Environmental Control (SCDHEC) to Greenville Women’s Center and Stericycle.” The notice states, in part, that the abortion facility “transported infectious waste to the Quick Trip gas station… on June 21, 2017, October 4, 2017, and October 18, 2017, and that the waste was transferred to Stericycle, Inc….”

Two more incidents were documented in the notice, on January 10th and January 21st of 2018. The transports were made by at least two different vehicles.

The notice also states that the abortion facility “failed to develop a written infectious waste management plan” and that the Bureau of Land and Waste Management may “impose monetary penalties” for the lack of a plan as well as for the unauthorized transport of infectious waste for disposal.

In the past, abortion facility owners have discussed problems they have in finding legal ways to dispose of the bodies of aborted children.