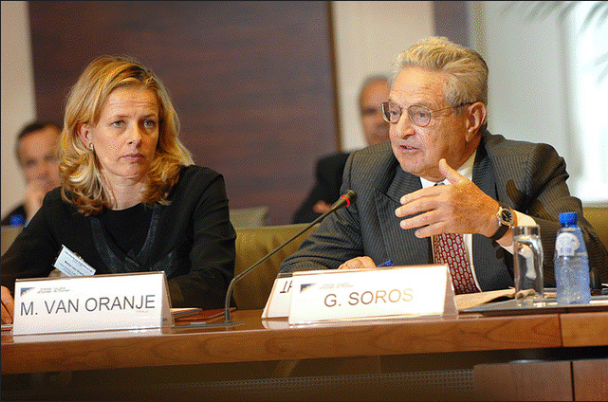 It is no secret that the billionaire godfather of globalism has invested some of his wealth in weakening Ireland’s constitutional sovereignty to protect preborn children. George Soros is founder and chairman of the Open Society Foundations, whose Women’s Rights Program under Section V.1 of their three year plan prepared a strategy to repeal Ireland’s pro-life Eighth Amendment, through which Irish voters outlawed abortion in 1983. The plan was exposed when the now-defunct DCLeaks.com procured OSF documents in August 2016.

“We will fund the Abortion Rights Campaign, Amnesty International Ireland, and the Irish Family Planning Association to work collectively on a campaign to repeal Ireland’s constitutional amendment granting equal rights to an implanted embryo as the pregnant woman (referred to as ‘fetal personhood’),” says the memo.

“With one of the most restrictive abortion laws in the world, a win there could impact other strongly Catholic countries in Europe, such as Poland, and provide much needed proof that change is possible, even in highly conservative places. The legalization of same-sex marriage offers valuable and timely opportunities to advance the campaign,” the plan continues, shamelessly appropriating another socially liberal cause as a gateway to legalized abortion.

This leaked strategy eventually prompted an investigation by Ireland’s Standards in Public Office Commission (SIPO), which determined the politically motivated foreign donation to the Abortion Rights Campaign (ARC) exceeded what was permitted by the Republic’s Electoral Acts. ARC countered, unconvincingly, that their goals were merely educational and “stigma-busting” rather than political, but they complied with returning €23,460 ($25,000 USD) to OSF in April 2017.

Why, then, have the other Irish organizations supported by OSF not experienced the same fate?

“The other groups argued that their campaign was not political, which is preposterous given they want to push through a change to our Constitution,” Niamh Ui Bhriain (pronounced Neeve O’Brian) of the Life Institute in Ireland tells Breitbart News. The answer is yet to be discovered, but Ui Bhriain is aware that the influx of foreign funding goes broader and deeper than what was revealed by the leaked OSF memo.

In fact, the pro-abortion campaign’s muscle has come less from the Irish people and more from American billionaires, according to Ui Bhriain, who in a 2015 article details the hefty contributions by Soros, Chuck Feeney, Bill Gates, the Ford Foundation, and the Planned Parenthood Federation to fund not only activism but pernicious lawsuits in favor of abortion.

One lawsuit, spearheaded by the Centre for Reproductive Rights, has resulted in the UN Human Rights Committee declaring that Ireland’s Eighth Amendment is “cruel, inhuman, and degrading” to women. The actual text of the pro-life amendment they deem equivalent to torture is as follows:

Ui Bhriain believes that Planned Parenthood calls the Emerald Isle the “jewel in the crown of the pro-life movement” because it is living evidence that women and children are safer without abortion.

“Ireland’s experience shows that you could ban abortion and protect women’s lives,” she says in her interview with Breitbart News. “We have one of the lowest maternal mortality rates and some of the best maternal healthcare in the world according to the UN. So abortion campaigners are focused on smashing Ireland’s laws because they know pro-lifers the world over can look to Ireland as a real, proven example of why abortion is never necessary.”

But Ui Bhriain is concerned that the relentless targeting by pro-abortion funding – not the general public – is pressuring a “referendum to abolish the Eighth Amendment next spring.”

Ui Bhriain thinks that President Trump’s reinstatement of the Mexico City Policy, which prohibits U.S. funding of non-governmental organizations that perform or advocate abortion, is a “positive influence” and might disperse the focus of pro-abortion groups.