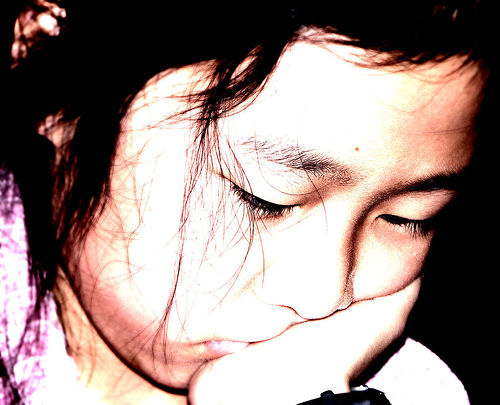 Make a commitment. Be active.

“You may choose to look the other way, but can never again say that you did not know.”

Abortion – it is a silent issue. Even as we stand up against this injustice in our daily lives, others still cannot hear the cries of the unborn. That is why we must speak out for them. And because of thousands of people who chose to speak out for the unborn, the injustice of abortion has made more noise than any other in the past years. We stood up, and we will continue to stand until justice prevails. We are pro-life activists, abortion abolitionists. We care.

And then there is slavery. Most people assume that this particular violation of human rights ended long ago. It made so much noise in its own time – the Civil War being a prime example. Yet today, slavery persists all across the world – in Cambodia, Africa, India, China, and…the United States of America.

Slavery is silent because the victims, mostly young girls ages twelve to fourteen, cannot speak out. They have voices, but no one can hear. Very few people know of this issue.

Let’s consider the statistics. According to Speak Up Revolution, roughly 100,000 people are trafficked in the United States every year. Human trafficking as a whole has generated billions of dollars, second only to the notorious business of drug-trafficking. It’s a serious issue and very similar to the abortion holocaust. About 1.2 million unborn babies are aborted in the United States every year, and over 40 million worldwide. Abortion is often done for selfish reasons: gendercide, inconvenience, disabilities, etc.

But the two issues are connected – abortion and human trafficking. Pimps kidnap girls and force them into sex-trafficking, and in order to cover up their tracks, abortions are initiated. Both issues mainly victimize young girls, though men are not excluded. They both take lives. They both generate a boatload of money. They’re both criminal industries. They’re both wrong. And they should both be abolished.

I have a proposition to make.

If you believe that God has called you to be active in the pro-life movement, obey Him. I believe that that is His calling for me, and I have been an abortion abolitionist for nearly three years now. But that doesn’t mean we have a ticket to ignore other injustices in this world. That doesn’t mean we can rightly ignore the plea of those subject to the sick, criminal industry of human trafficking.

The smallest actions can make major changes in society – as pro-life activists, we all know that. So can we start applying what we know to other areas of our lives and our culture?

With me, make a commitment today to be active in a small way.