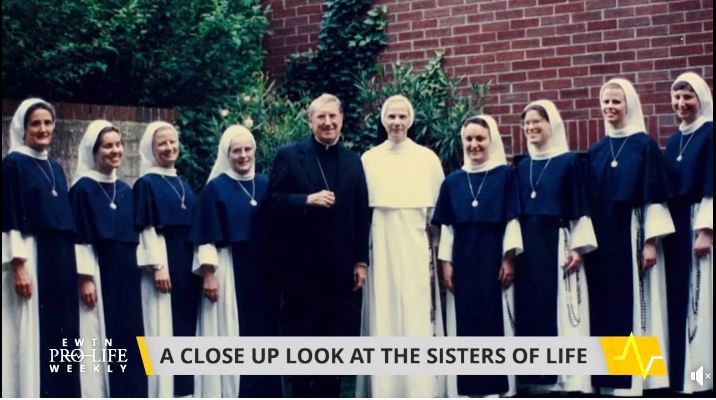 The Sisters of Life was formed in 1991 as a direct response to a moving experience founder Cardinal John O’Connor of New York had while visiting the Dachau concentration camp. In the crematorium where the bodies of Jews and others who had been gassed to death were reduced to ashes, Cardinal O’Connor mourned the evident lack of respect for human life.

Understanding that a lack of respect for human life in his own time was leading to a tragic loss of life each year to abortion, he resolved to found an order of religious sisters whose mission would be to promote life.

Eight women answered the newspaper ad he placed, which simply read: “Help Wanted: Sisters of Life.” Thirty years later the Order has grown to 116 members. In addition to the traditional vows of poverty, chastity, and obedience, each Sister of Life takes a fourth vow to protect and enhance the sacredness of human life. The sisters serve in a variety of locations across the United States and now in Canada.

The two biggest ways they seek to promote human life are through their work with vulnerable pregnant women, to whom they provide housing, help with rent or utility payments, and more, and by ministering to hurting post-abortive women through their Hope and Healing program.

Sr. Gianna, who serves at the Sisters’ Visitation Mission pregnancy resource center in lower Manhattan that serves over 1,000 women every year, spoke to The Tablet about their ministry to women considering abortion. She commented, “We have encountered in our mission vulnerable, pregnant women, those who might be feeling so alone in an unexpected pregnancy. We offer material support. We don’t offer them just diapers and a stroller, but love, so that they know that they’re not alone.”

READ: Nicole nearly took the abortion pill. Then she called the Sisters of Life, and everything changed.

In an interview with EWTN’s Pro-Life Weekly, Sr. Magdalen Teresa, who serves as head of the Visitation Mission, spoke about the Sisters’ other primary emphasis- helping women heal after abortion. She explained:

Because maternity is forever, that’s a big principle that we live by, a woman will feel a huge loss after she has…lost her baby to abortion. So when she comes to understand that, she will wrestle with that and need to walk toward healing. That’s a big grace that we love to share. We love to share that there is healing after abortion. There is hope. We love to push aside the veil that covers the mercy of God. “Look, look at God’s mercy!” It’s like a lighthouse.

So many women that we’ve served in the past, now they’ve been able to trust God through the hardship of coming back to Him after suffering an abortion. She becomes this big lighthouse of knowing that there’s a way through the pain. [Women who’ve healed after abortion are] the most gorgeous women, ’cause they know that there’s been suffering but they also know the absolute truth in trusting God through this.

In pursuit of their mission, the Sisters have also released several children’s books, host a podcast, speak at various retreats and events across the country, and engage in outreach to college students at several campuses in Colorado. Their most recent venture is the creation of a webpage regarding End-of-Life issues.