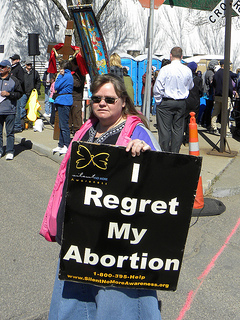 One of the newest tactics from abortion advocates to help them obtain their dream world of abortion being available for free, on demand, and for any reason at all is to tackle the idea of abortion being stigmatized. The latest to make the case for the destigmatization of abortion is Carly “women could accomplish nothing without abortion” Manes. Lots of women have abortions, and if they would only speak up about it, people wouldn’t hate abortion so much!

One in three women will have an abortion in her lifetime.

These are real peoples’ lives. These are women in our community. One in three isn’t just a statistic — it’s a representation of all the women in your life who have had abortions but have not been given the opportunity to talk about it. Every time an anti-abortion law is brought to the floor, every time a group of anti-abortion activists stands in front of a clinic entrance with signs that shame individuals who have abortions, we are failing one-third of our nation’s women. We are effectively telling women who have had abortions, and women who are going to have abortions — outlawing abortion doesn’t stop abortions from happening — that their experience is shameful, and that the choice they made about their pregnancy is wrong. This is the stigma, and when we stigmatize abortion in this way, we are silencing a whole lot of people.

Hey Carly, you know who else is silenced because of abortion? The millions of people killed because they were inconvenient. They were silenced, too, but their voices don’t count, right?

What is far more disturbing about Manes’ whining about the stigma surrounding abortion — echoed by plenty of other abortion advocates as well — is that abortion is something not deserving of shame. It’s as if it should be seen as some kind of force for moral good. Women should speak loudly and proudly about their abortions, and that will erase the stigma!

That’s why, starting today, with the 1 in 3 Campaign Week of Action, we are changing the conversation. The 1 in 3 Campaign is about letting individuals who have had abortions tell their stories without the shame and stigma that currently surrounds the abortion conversation. We are reclaiming our voices, and telling our stories so that woman around the nation can tell theirs too. Not only do we hope that the sharing of personal abortion stories finally puts an end to the stigmatization of abortion and women who have abortions, but we hope it mobilizes abortion supporters to advocate for safe, legal and affordable abortion care.

In their fantasy world with a moral relativism, anything goes, devil may care society, maybe it makes sense for there not to be a stigma surrounding abortion. We shouldn’t ever judge anyone, right? But society does judge people, for all kinds of reasons. Do we look down on people who are alcoholics? Prescription drug abusers? Yes, we do. Alcohol and prescription drugs may be legal, but abusing them is not smiled upon. There is help for people who are alcoholics or hooked on prescription drugs, but there are very few people that will argue that we need to erase the stigma surrounding being an alcoholic or a drug abuser.

So let’s say abortion is, and should continue to be, legal. Why does that mean that the stigma should be erased from it? Pregnancy is not a random medical ailment that happens to women for no reason whatsoever. It’s not cancer or disease or a disability. Women become pregnant because they had sex, and the overwhelming majority of the time, they did so willingly. When the result of their choice is inconvenient to them, then their solution is to callously discard the life they created. There’s nothing to destigmatize there.

Acting as if abortion is the same as any other medical procedure is simply a lie. Abortion stops a beating heart, it takes a life. Using abortion as a form of birth control, to erase your mistakes and lack of personal responsibility, is abhorrent. It isn’t something to be celebrated or proud of.

Instead of aiming to make abortion a last resort for women, and trying to empower them to where they won’t be in a situation to ever need an abortion, pro-aborts like Manes want to make it mainstream and common. They want to treat it like it’s just another medical procedure, that women have no reason to feel shame for snuffing out a life purely for convenience sake. It’s a truly sickening thought.

And thankfully, most of the country doesn’t feel the same way — yet.