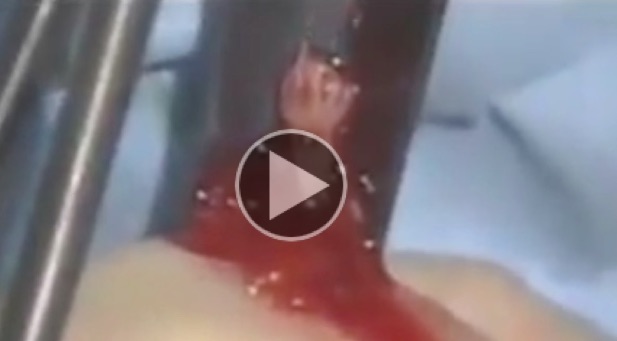 In a disturbing video posted on the Medical Videos* website, a surgical abortion is shown in close-up detail, in real time. Seconds into the video, a tiny human leg and foot emerges. No body is attached.

Seconds later, the camera zooms in as a clearly-defined hand, connected to an arm, is pulled out.

The video appears to show portions of at least three abortions. In the second, tiny feet are shown as blood pools around them while the abortion continues.

In the third abortion, a mutilated, but nearly intact baby is pulled from her mother’s womb. Her head, which seems to be at least partially disconnected from her body is jerked around as she is yanked, along with her umbilical cord, out of her mother. This baby’s fairly large, curled-up feet and legs and her arms and hands are shown briefly on camera as the abortionist appears to work on some part of the baby or umbilical cord that is now outside the womb.

WATCH the video for yourself here.

Perhaps if more “normal people” were willing to witness the brutal realities of abortion, we would collectively reject it for the human rights injustice it is.