Senator Manchin, who has always called himself “pro-life,” was recently pictured “standing with Planned Parenthood.”  Pro-lifers were stunned, with Susan B. Anthony List president Marjorie Dannenfelser calling the switch a “profound betrayal of the unborn and their mothers” and an “enormous mistake both morally and politically.” 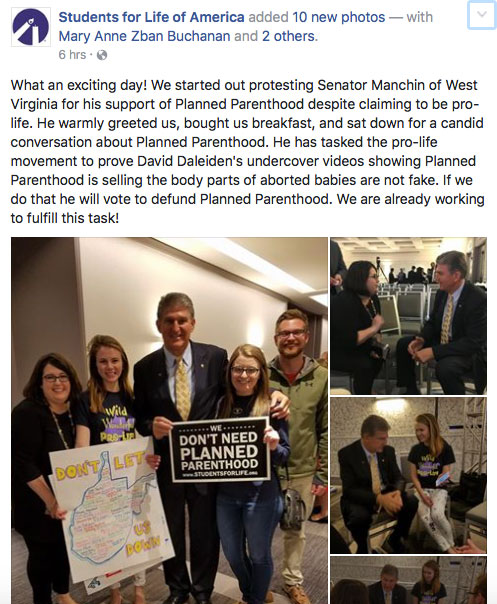 In 2015, Senator Manchin was one of the few Democrats who broke ranks to vote for defunding Planned Parenthood. At the time, he said:

I am very troubled by the callous behavior of Planned Parenthood staff in recently released videos, which casually discuss the sale, possibly for profit, of fetal tissue after an abortion. Until these allegations have been answered and resolved, I do not believe that taxpayer money should be used to fund this organization; instead those funds should be sent to other health care providers, including community health centers, which provide important women’s healthcare services.

Well, these “allegations” Senator Manchin mentions have been “answered and resolved” to a certain extent — thanks to a Congressional investigation — and the findings are indeed troubling. Here’s why pro-lifers don’t have to “prove” anything more:

1. The House Select Investigative Panel for Infant Lives has referred Planned Parenthood for criminal charges, based on what was uncovered by the Center for Medical Progress videos and also based on documentation obtained from Planned Parenthood and its partners during the course of the Panel’s investigation.

2. California Attorney General Xavier Becerra has just charged David Daleiden and Sandra Merritt with 15 felonies for their undercover recordings of Planned Parenthood employees and partners. The Stream notes that Becerra “brought one charge for each of the 14 people filmed. The 15th is for conspiring to invade privacy,” adding, “California law makes it illegal to record someone without their knowledge when they reasonably expect privacy. However, other journalists have not been charged for similar investigative work in California.”

If the footage isn’t real, and the people seen in the videos aren’t real representatives of the abortion industry, then it seems highly strange for an attorney general to bring charges against CMP (bogus as the charges are).

3. Planned Parenthood’s CEO Cecile Richards apologized for the “tone” of Dr. Deborah Nucatola after the first video (in which Nucatola munched on salad while discussing how best to obtain intact fetal organs during an abortion) was released. Richards claimed her organization doesn’t take money for harvesting organs — but she did not deny that Planned Parenthood allowed those organs to be harvested from human beings who had no voice or choice in the matter, nor did she deny that Nucatola made those statements on the undercover recording.

4. Two forensic analyses actually revealed no evidence of audio or video manipulation in the CMP videos. (Interestingly enough, Planned Parenthood’s own hired firm, Fusion GPS, was recently implicated in a federal investigation over its ties to the Russian government.) In the second forensic analysis, Coalfire Systems actually analyzed the full footage of all the videos released at that time, finding no evidence of manipulation, and finding that time gaps in the full footage consisted of bathroom breaks, food consumption, and travel.

All signs point to the fact that Planned Parenthood employees and their fetal tissue harvesting partners actually made these statements on the CMP videos. No one forced Deborah Nucatola, PPFA’s medical director, to say that she was really good at “crushing” fetal bodies above and below their valuable, harvestable organs. No one “faked” that conversation, which took place in a public restaurant.

No one forced Vice President of Planned Parenthood of the Rocky Mountains and abortionist, Savita Ginde, to state on film in the POC room that pricing things “per item” (per organ) was a better idea than pricing per entire fetal cadaver, because that way they could “see how much [they] can get out of it.”

Cecile Richards herself, the CEO of Planned Parenthood, even appears briefly in one of the undercover videos. These people saying things about harvesting fetal organs were not actors. They are actual employees of Planned Parenthood and its partners, and this information is freely available, thanks to the wonders of the internet. (Please, Senator Manchin, do go ahead and Google their names — you can even find the list at the bottom of this page — should you and your Planned Parenthood-funded Democrat colleagues in Congress ever decide to actually view the videos. Here’s a link to the videos for your convenience.)

A large portion of the public, when faced with the awful reality of these videos, was horrified. It seems that only the very hardened abortion supporter looked into the face of evil and claimed that it had to be fake — no way could the nation’s largest abortion chain be actually selling the parts of the babies it just slaughtered for money. And the politicians…well, most of them didn’t even face the awful reality of the videos, because many of them denounced the videos as “fake” without ever viewing a single one.

The Planned Parenthood propaganda machine is out in full force, and it knows if it repeats things like “faked, deceptively edited videos” enough, that people — even politicians — will start to believe the lies, despite what their own eyes and ears tell them. Those who want to be truly informed, however, should watch the Planned Parenthood videos (full footage available here) and decide for themselves if Planned Parenthood’s claims hold water.

Senator Manchin, it’s not up to pro-lifers to prove that the CMP videos aren’t fake. Planned Parenthood already freely admits that it commits the lion’s share of abortions (nearly 35 percent — 323,999 per year) in this nation, and it admits that it allows the bodies of those children to be harvested and used for what it calls “good” — after killing them for money.

You really need more “proof” of this to convince you that you shouldn’t vote to keep giving this organization half a billion dollars every year? Shameful.