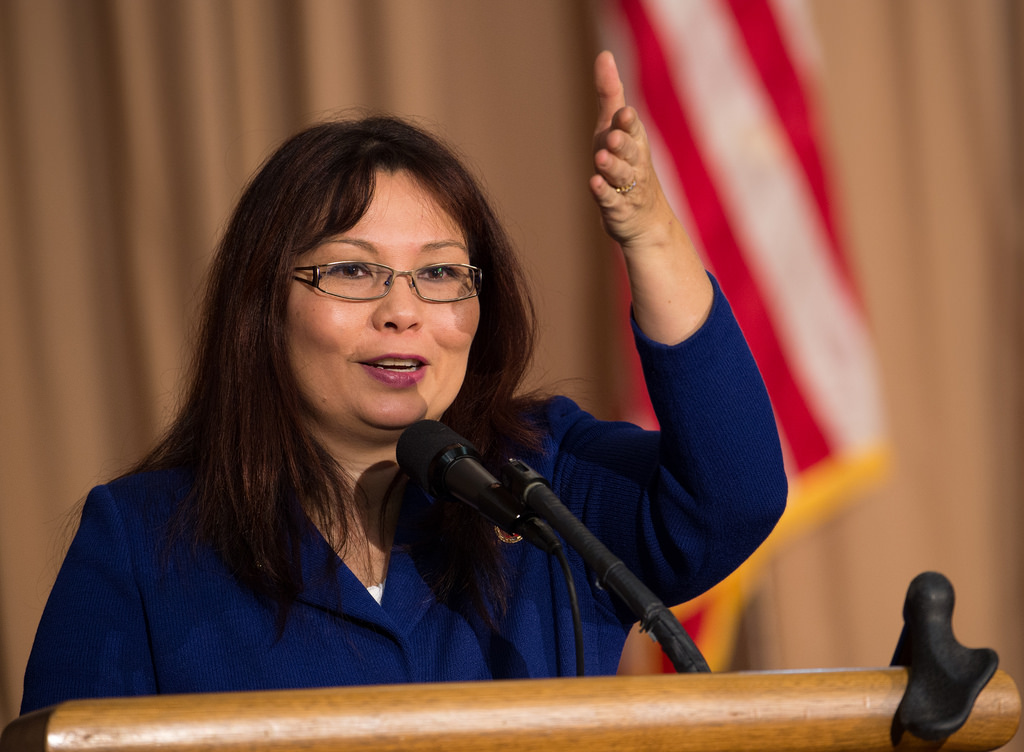 Tammy Duckworth recently became the first senator to give birth while in office. Duckworth, a former lieutenant colonel in the Army, was a helicopter pilot whose Black Hawk was shot down over Iraq, causing her to lose both of her legs. She became the first female double amputee, and retired from the Army. She then began her political career, while also growing her family. “Bryan, Abigail and I couldn’t be happier to welcome little Maile Pearl as the newest addition to our family and we’re deeply honored that our good friend Senator (Daniel) Akaka was able to bless her name for us — his help in naming both of our daughters means he will always be with us,” she said in a statement.

While Duckworth is taking 12 weeks of maternity leave, she will be remaining in Washington, D.C. so that she can vote if necessary. She pushed for changes to the Senate rules, making her — and any other parenting senators — better able to balance the demands of life as a lawmaker and as a mother. And the Senate quickly embraced these changes, passing a new rule allowing children under the age of one to be present on the Senate floor.

I may have to vote today, so Maile’s outfit is prepped. I made sure she has a jacket so she doesn’t violate the Senate floor dress code (which requires blazers). I’m not sure what the policy is on duckling onesies, but I think we’re ready pic.twitter.com/SsNHEuSVnY

“Being a parent is a difficult job, and the Senate rules shouldn’t make it any harder,” Senate Rules Committee Chairman Roy Blunt, R-Mo., said. “I’m glad we were able to get this done to address the needs of parents in the Senate.”

“Maile Pearl, welcome to the world — and welcome to the United States Senate,” said Sen. Dick Durbin, D-Ill, adding that it will “do us good, every once in a while, to see a pacifier next to the antique inkwells on our desks, or a diaper bag next to a brass spittoon that hasn’t been used in decades.”

Sen. Ben Sasse, R-NE, spoke in favor of the change on Facebook. “My colleague from Illinois, Senator Tammy Duckworth, just became the first sitting senator to give birth in office. She’s dealing with all the stuff that new moms and dads deal with – sleepless nights, diapers, feedings, and sleepless nights. Did I mention sleepless nights?” he wrote. “But she’s also a Senator with busy day job. So, we changed the Senate rules to allow her to bring her newborn to the Senate floor. I think we’re wise to listen to Senator Duckworth on this one.” Calling Maile’s birth a gift, Sasse acknowledged that new lives are precious — but also that they can turn someone’s life upside down.

“Parenthood is hard work. But it’s great and beautiful. It completely reshapes how you think about unconditional love. We, as a society, ought to be coming alongside new moms and dads and supporting them as best we can,” he said. “For the Senate, that means helping Senator Duckworth be a full-time mom and a full-time public servant.” He then called for more workplaces to follow their example, making babies welcome in our lives.

“Even if there isn’t a one-size fits all policy for every workplace, this one seems clear cut. Let’s broadcast, on C-SPAN every day, what a good thing it is for moms to be able to feed their newborns at work,” he wrote. “The Senate made the right call on this change. It sends a clear message that babies like Maile Pearl are welcome: in our lives, in our hearts, and on the Senate floor.”

Duckworth has been an advocate for mothers for a long time, helping military mothers, co-sponsoring bills for paid paternal leave and affordable childcare, calling for on-campus childcare for students. She also, however, supports abortion, along with many of her fellow senators. While this rule change in the Senate is laudable, and certainly sets an example for embracing life, how much more powerful would it be if they also set an example of welcoming and supporting all new babies, even those born under less-than-perfect circumstances? That would truly groundbreaking.