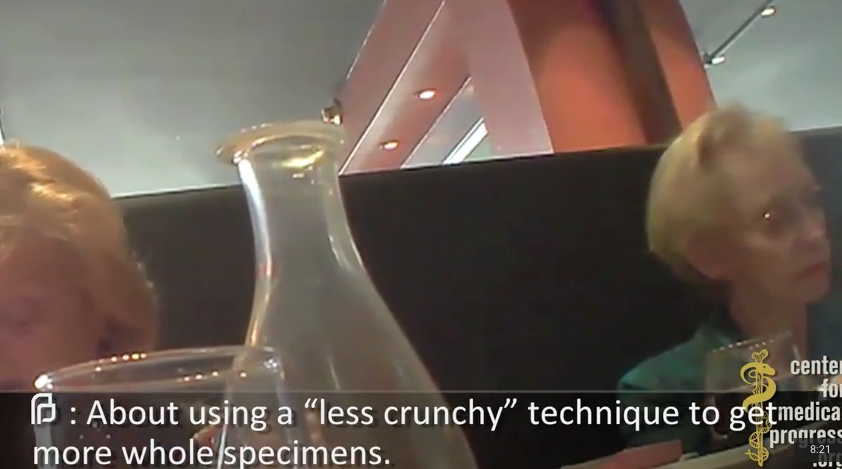 A striking feature in all three undercover videos released by the Center for Medical Progress is the callous way in which abortion workers discuss the parts of babies they have killed or have been complicit in killing.

Callous is generally defined as being cold or hardened to something; this is what we see with these abortion doctors. They discuss “tissue” and “intact specimens” as if they were discussing blood taken from the arm of a conscious patient.

In the first video, Dr. Deborah Nucatola talks casually about aborting viable fetuses and getting that tissue:

From my perspective, I think it’s not going to be reasonable to be collecting at a site that does not have the capability to go farther up in to the 2nd trimester. It doesn’t mean that the facility needs to go all the way up to 24 weeks every time but, to be able to at least say we can go up to 12 and 16, 12 and 18 would probably be better, for the age protocols that require later gestational tissue, 18 weeks is kind of the lowest range, 18 to 20, 24 for certain things. So, if we could get up to 18, that would make it worth it to be operating at that site. (Transcript, page 5)

It’s like she’s discussing data instead of babies. She does actually mention death – in a way:

Because if you induce a demise before the procedure, nobody’s going to say you did a “live”—whatever the federal government calls it. Partial-birth abortion. It’s not a medical term, it doesn’t exist in reality. So some people use it to avoid providing a “partial-birth abortion.” Others use it because they actually think it makes the tissue softer and it makes it safer and easier to do the procedure. Is there data for either of these? No. Because number 1, the Federal Abortion Ban is a law, and laws are up to interpretation. (Transcript, page 39)

Nucatola not only notes how to bypass the law, but remarks on how to kill babies (“induce a demise”) while doing it, as matter-of-factly as if she is talking about the annual budget.

The doctor in the second video, Mary Gatter, also shows a callousness as she discusses prices – making her now infamous Lamborghini comment:

Well, it’s complicated by the fact that our volume is so low too. I mean, are you looking at 8 and 9 week specimens or only 2nd trimester specimens? (Transcript, page 10)

Gatter repeatedly refers to babies as “specimens.” But, like Nucatola, she borders on referring to a baby as a person—one to dismember:

And then she makes her other now-infamous comment about “less crunchy” abortions, referring to manual vacuum aspiration, which can be more dangerous and painful for women, but which she says will yield “whole specimens”:

And then, if we want to pursue this, mutually, I talk to Ian and see how he feels about using a “less crunchy” technique to get more whole specimens. (Transcript, page 22)

The latest video shows Dr. Katharine Sheehan, Medical Director of Planned Parenthood Pacific Southwest, casually mentioning fetal procurement agencies who do “big government collections” (of babies). And Dr. Savita Ginde, Vice President and Medical Director of Planned Parenthood of the Rocky Mountains, comments about how the kidneys are intact in a pie tray of baby parts. “Because if I looked at that, I’d be like, that’s good to go”  – as a medical assistant says, “five stars” in the background, laughing. She goes on to discuss the selling of fetal parts: “I think a per item thing works a little better, just because we can see how much we can get out of it.”

All of these doctors once took the Hippocratic Oath, which says, in part, “Above all, I must not play at God. I will remember that I do not treat a fever chart, a cancerous growth, but a sick human being, whose illness may affect the person’s family and economic stability.” And yet they have forgotten the humanity of the preborn baby.

M. C. Kaveny writes in “Appropriation of Evil: Cooperation’s Mirror Image,”  a sobering statement about the power of desensitization of evil and profit from abortion:

An additional danger is present.  Individuals involved in any of the above actions can become desensitized to the sanctity of life.  This is particularly true if one has become accustomed to benefits flowing from the performance of an action that foreseeably but unintentionally results in the death of a human being.  If one is profiting from abortion, even remotely, it might be tempting to decide against taking steps to eliminate it.

A potentially more serious problem to be faced is an interior one—how to justify profiting from a grave evil already committed by another.  The cooperator “might simply develop an elaborate scheme of self-deceiving rationalization.” (Theological Studies 61 [2000], 288-306. )

Clearly these physicians have become desensitized and appear to have developed “self-deceiving rationalization.” There’s no other way one could discuss a slaughtered baby and his or her body parts so callously otherwise.