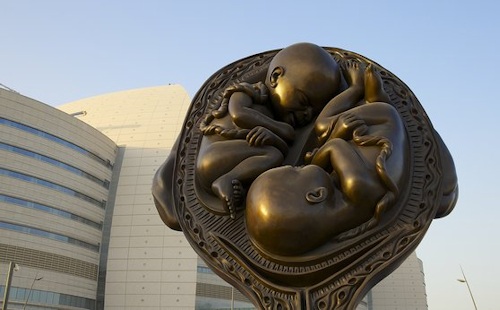 The display, called “The Miraculous Journey,” has been considered provocative in the region. However, the chairwoman contrasted prenatal development with the more offensive depiction of nudity, saying:

To have something like this is less daring than having a lot of nudity. There is a verse in the Koran about the miracle of birth. It is not against our culture or our religion.

Sheikha al Mayassa aims to introduce new and thought-provoking art in her capacity as chairwoman. The artist cited the magnificence of the prenatal journey as his motivation for drawing attention to the frequent but constantly inspiring journey of childbirth:

Ultimately, the journey a baby goes through before birth is bigger than anything it will experience in its human life. I hope the sculpture will instill in the viewer a sense of awe and wonder at this extraordinary human process, which will soon be occurring in the Sidra Medical Center, as well as every second all across the globe. 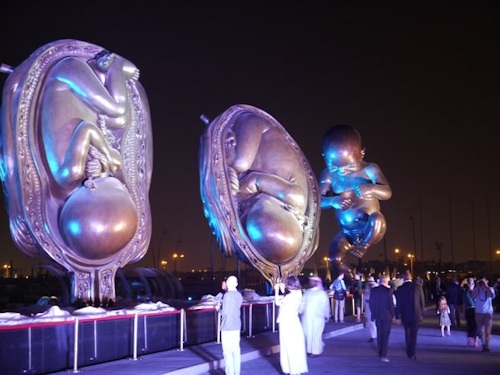 The bronze sculptures were unveiled on October 7, 2013. They were installed outside the Sidra Medical and Research Center in Qatar, a women’s and children’s hospital. A magnificent spectacle weighing a combined 216 tons, the fourteen pieces range from gargantuan depictions of a single sperm, to – ultimately – an anatomically correct baby boy. “Everyone talks about our life’s journey, but we have a whole journey before you’re born,” Hirst said of the display he designed. 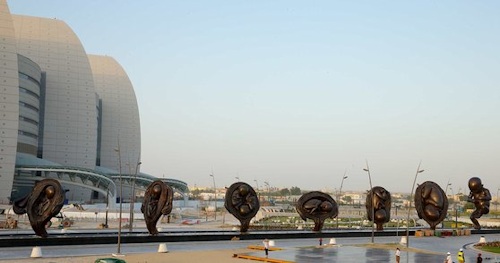 The reported cost of The Miraculous Journey is $20 million, although that has not been confirmed by either Hirst or Sheikha al Mayassa. A video of Hirst’s production can be viewed at this New York Times article on the story.