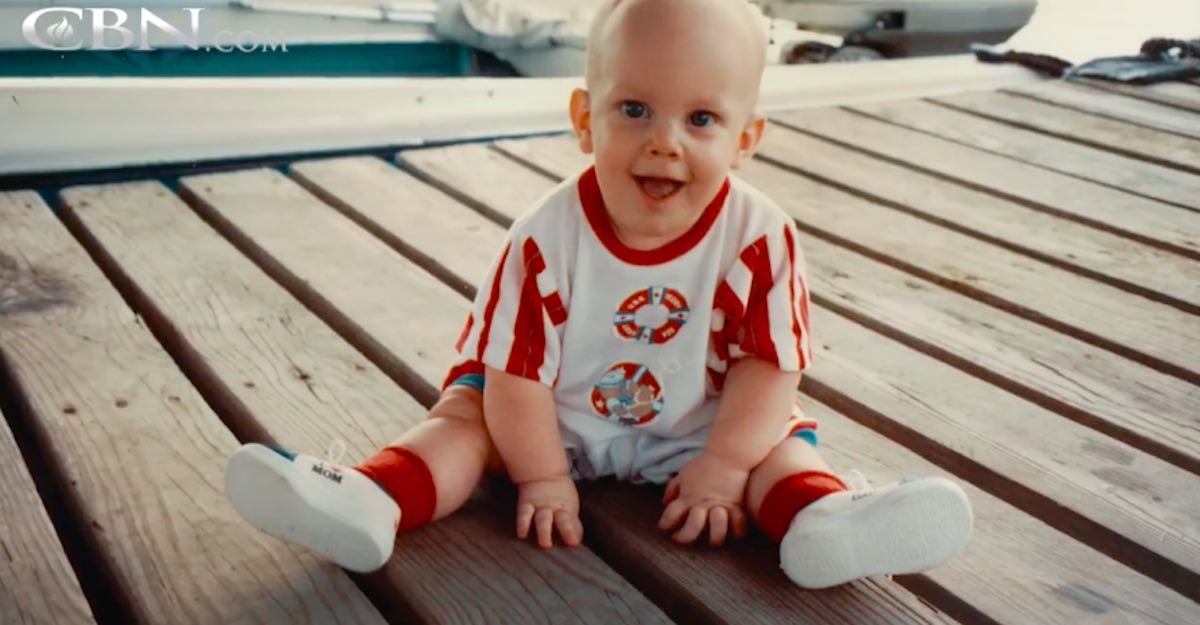 In 2018, a young man named David Scotton highlighted his own adoption story in the short documentary, “I Lived On Parker Avenue.” A year later, in late 2019, CBN’s The 700 Club recapped the story in a video capturing the perspectives of Scotton’s biological and adoptive parents. Scotton was saved from an abortion when, according to his birth mother, God supernaturally intervened.

Scotton’s mother Melissa Cole, was 18, unprepared, and scared. But she chose to place her son for adoption after narrowly escaping the jaws of abortion. “Right as [the abortionist’s] hands went in to touch me, his glove hit my left leg. I heard this voice say, ‘It’s not too late, get up.’ I know it’s the Lord, 100 percent. And I just said, ‘I can’t do this.’ The doctor gets up, rolls his eyes, rips his gloves off, and leaves the room, and left me.”

After that day, Melissa sought out an adoption service and started the search for an adoptive family. She wanted to be sure that family would raise her son in a similar fashion that she would have. Melissa stated, “I wanted him… and I think if he was with someone that was more like me, then he would have been raised more like how I would have raised him.”

Melissa learned of the Scotton family through a letter and later discovered through a phone call with Susan Scotton that this was the perfect family for her son. Overjoyed, Melissa recounts, “And I just said, ‘Congratulations, you’re a mom.’ Because I knew – I just, I knew at that point she was gonna be the mom that was gonna take him fishing. And teach him the kind of things I would teach him.”

Choosing Life From an Abortionist’s Table

An 18-year-old changes her mind as she’s about to undergo an abortion, chooses adoption, and gives birth to a son who grows into a powerful voice for the unborn.Watch or read more of this powerful story: http://now.CBN.com/mT7b50wODg9

But before that life-changing phone call, Scotton’s adoptive mother Susan, eagerly longing to be a mother, had already encountered her share of struggles. During her first marriage, she had given birth to two baby boys. Both were diagnosed with a rare genetic disorder that claimed each of their lives; her first son lived for just 12 days after birth, and the second lived for two and half years after birth. After this, her husband abandoned her, leaving her to deal with the devastation on her own. “I had a hard time having any faith, any hopes. I couldn’t have a healthy child. I was angry,” Susan explained to CBN.

Time passed after Susan’s divorce, and she eventually met Jimmy Scotton. They married and almost immediately began their adoption search. “I just prayed for a healthy child… for the right thing to work out,” said Susan.

But things didn’t happen right away. Jimmy elaborated on the two-year process of waiting. “There was so many letdowns, and the process was difficult. But I kept saying, ‘We can do this. God’s helping us. And we just need to stick with it.'”

Their prayers had been answered when Melissa chose the Scottons to be the parents of her son — but everything came to fruition when the Scottons got the call on December 22, 1993, that Melissa had given birth to a healthy baby boy. Jimmy recalls, “I was excited and so much was going through my mind, I almost forgot to call Susan and tell her that the baby was born!”

Since then, that baby boy, David Scotton, has grown into a young man of faith, who recently graduated from law school. When he reached an age where he could meet his birth parents, he was cautiously optimistic, and took the opportunity. Their meeting has helped Melissa and David’s biological father, Brian, to not only begin to heal from the painful past but also look forward with optimism to new goals — and towards protecting preborn children from abortion.

Together, David and his birth mother Melissa now work to “inform women about adoption and encourage them to choose life.”