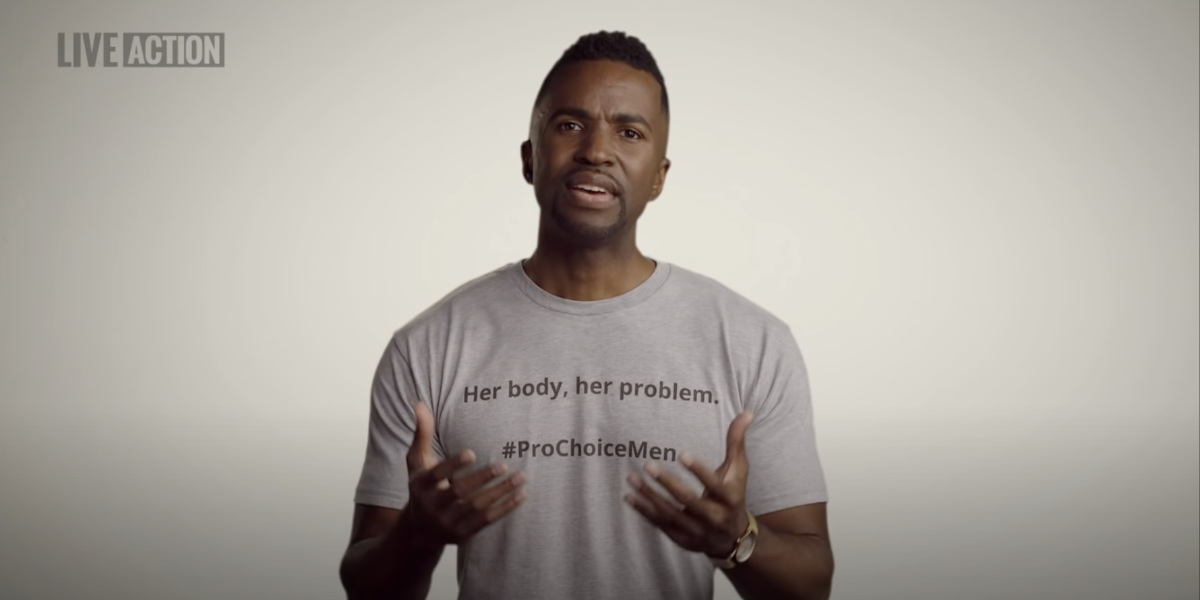 Too often, we leave men out of the abortion discussion. But they can be a highly influential variable affecting the mother’s ultimate decision to either keep or abort her child. And abortions often happen to protect men’s interests.

Two recent media pieces address the ways in which men benefit from abortion — one, an article entitled “Men like me benefit from safe abortion access” published on WBUR’s Cognoscenti forum, is sincere; the other, a video entitled #ProChoiceMen, is satirical.

Kaivan Shroff, author of the WBUR article, lists a variety of reasons why he doesn’t want a child. But he dances around the truth. The video #ProChoiceMen, however, cuts to the heart of the objections Shroff raises. Below is a comparison list…

“Pro-choice” man (Shroff): “At 28, after 10 years of college and multiple graduate schools, in many ways, it feels like my life is just about to begin.”

#ProChoiceMen translates: “Abortion has allowed [me to] … stay home and chase my dream of becoming a professional gamer, comedian, and social media influencer.”

While the latter of these statements is meant to be tongue-in-cheek, the underlying message is the same: “I’m too self-centered to consider taking on any adult responsibilities.”  The man is thinking only of his own life and future, not the life of his preborn child, which literally is just beginning.

#ProChoiceMen translates: “I deserve to enjoy sex without commitment, marriage, or parenthood.”

#ProChoiceMen satirically translates: “If I had to take care of a kid, I never would have been able to get my Tesla. My Tesla is my baby.”

The underlying message here is, “I’m not willing to make any personal financial sacrifices, even as a consequence of my own actions.”

#ProChoiceMen translates: “It’s ridiculous to think that just because I’m the father, I’m expected to be a dad.”

“Pro-choice” man (Shroff): “If [a sex partner] still got pregnant … though entirely her decision, I assume we would both want the same thing: an abortion.”

#ProChoiceMen translates: “It’s ‘Her body, and her choice’ … so don’t be asking me for anything. And look, I’m a caring guy. If I get a girl pregnant and then abandon her, I don’t want to leave her alone with a kid. Especially if she might chase me down for child support.”

“Pro-choice” man (Shroff): “I’ve viewed accessible abortion as something my partners and I could reasonably rely on as a last resort. That security has informed my approach to sexual exploration and relationships.”

#ProChoiceMen translates: “I deserve to be free from any responsibility for some girl I get pregnant.”

“Pro-choice” man (Shroff): “I admit I’m scared of what eliminating access to abortion would mean for my own life.”

#ProChoiceMen translates: “The other side will point out that abortion kills a human being. But my right to impregnate a woman and then leave her in the dust outweighs the baby’s right to life.”

In his article, Shroff talks about “safe sex” and “sexual exploration” as though the former were a true reality and the latter something that can and should be undertaken without regard for potential consequences. Apparently nobody ever told him the hard truth implied by #ProChoiceMen and bluntly articulated by Samantha D on Twitter:

Sex is risky. Even with birth control, a child can be created. Welcome to adulthood where your actions have consequences. If you create a child, whether on purpose or accident, you are now a parent and should protect your child – not choose to kill them. It’s time to grow up.