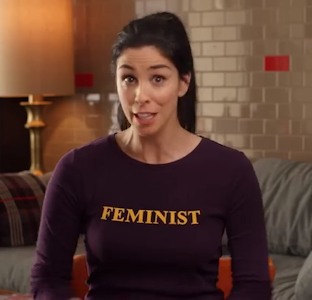 By now you’ve probably heard that Sarah Silverman released an offensive video about being visited by “Jesus F***ing Christ.” Silverman is in a category that is hard to exactly call atheist, because if she really didn’t believe in God, she probably wouldn’t have such a problem with him. Anyway, in her video, she asks Jesus, “When does life begin?” His answer was totally Silverman-esque, but failed to take into account actual basic biology:

Silverman thanks Jesus for his insights, and explains to her viewers that the separation of church and state desired by the Founding Fathers demands that politics don’t interfere with abortion rights (Silverman may have overlooked that the so-called “right to abortion” was the product of a political decision in 1973…). She says:

Using religion to dictate legislation is un-American. But it’s happening.

Silverman goes on to compare the “fertilized eggs” to sperm. Since both are alive, she reasons, pro-lifers must see sperm as millions of little babies. In that case, mandating pre-abortion ultrasounds, which allow pregnant women to see the life they would be ending by going through with the procedure, are the same thing as probing a man’s reproductive organs and forcing him to look at his sperm so that he won’t waste it needlessly.

Sarah Silverman probably took biology at some point in her life, but she seems a little rusty on some of the basics, like the difference between gametes and humans. That’s OK — Kristi Burton Brown clarified that whole issue a while back:

See, there’s a very big difference between an egg, a sperm, and the new, unique, separate human being formed through the combination of an egg and a sperm. By themselves, an egg and a sperm only have potential to become a new life. But they are not new life in and of themselves. However, once they combine, it’s a different story, and our words and descriptions ought to reflect this.

Honest people should find some way of communicating that this “fertilized egg” isn’t the equivalent of those all-natural, farm fresh chicken eggs you have sitting in your refrigerator. But sadly, many in the mainstream media would prefer that chickens and breakfast and their fridge are exactly what their readers think about – anything to avoid the true topic of human oppression here.

Science doesn’t deceive like that. And if we want to be accurate, trusted, and honest – neither should we. (If you’re wondering where I got those little add-on descriptions above, or if you’d like to find a list of scientifically accurate language, see this article from Princeton.)

(Thanks, Kristi.) So, Sarah: it’s OK to be confused about science, and to be angry at a God you don’t believe in. (Everyone does things that don’t make sense sometimes.) But we hope you’ll take this opportunity to brush up on your biology textbooks to make your videos a little more convincing.