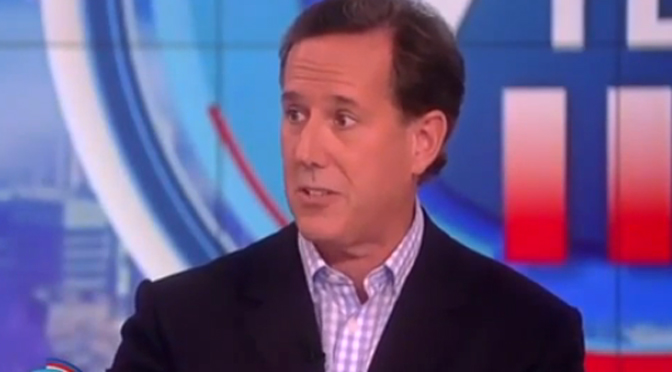 On Wednesday, Republican presidential candidate and former Pennsylvania Senator Rick Santorum went on the left-wing talk show The View, where the debate turned to one of the more persistent myths about Planned Parenthood’s services.

In response to Whoopi Goldberg asking of Planned Parenthood’s taxpayer funding, “What will you replace it with if you take it away?” Santorum answered:

Goldberg interrupted to claim, “Yeah, they do,” but Santorum responded:

In fact, [Planned Parenthood CEO] Cecile Richards said yesterday in the hearing that, in fact, they do not. In fact, there are no Planned Parenthoods that provide any mammogram services. They basically provide abortion, contraceptive, STDs, things — and pregnancy tests. That’s it.

At Tuesday’s Congressional hearing, Richards testified, “We do not have mammogram machines at our health centers. And we’ve never stated that we did.” Additionally, pro-life organization And Then There Were None recently made hundreds of calls to Planned Parenthood locations, none of which managed to make mammogram appointments.

Co-host Paula Faris then asked, “Will these clinics then provide abortions or where do you want these displaced women to go?” Santorum noted:

But the money that is going to Planned Parenthood cannot be used for abortion. So, when you reallocate that money away, it shouldn’t effect their ability to provide abortion unless, of course, they are commingling funds. And that’s one of the questions people have.

While Planned Parenthood cannot technically spend its tax subsidies directly on abortion, pro-lifers fear that they free the organization to spend more of its private revenue on abortion. According to the Susan B. Anthony List, between 2000 and 2013, government Planned Parenthood funding increased by over $326 million, while annual abortions performed rose by 130,583, “a 66 percent increase in the number of abortions.”