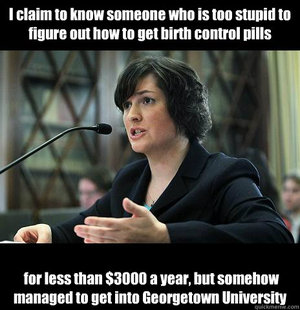 Separating the wheat from the chaff…or maybe just the chaff from the other chaff. 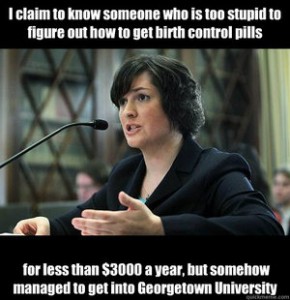 In what feels like the longest fifteen minutes of fame ever, “War on Women” figurehead Sandra Fluke is up for consideration to be chosen as TIME Magazine’s 2012 Person of the Year. With 39 competitors (most of whom actually accomplished something) and 73% of TIME’s own readers voting “No Way,” poor Sandra’s facing an uphill battle. Maybe that has something to do with the reality-challenged case Kate Pickert makes for the left’s wannabe Joan of Arc:

The daughter of a conservative Christian pastor, Sandra Fluke, 31, became a women’s-rights activist in college and continued her advocacy as a law student at Georgetown.

First, Richard Fluke is a United Methodist pastor who seems to wholeheartedly endorse his daughter’s crusade; as Kristen noted the other day, the United Methodist Church isn’t all that conservative, and it shows. Second, does anybody else see a problem with the juxtaposition of “age 31” and “college student”?

After she complained about being denied a chance to testify at a Republican-run House hearing on insurance coverage for birth control, Rush Limbaugh called Fluke a “slut.”

Since Kate won’t tell it, here’s the rest of the story about Fluke’s farcical complaint. The Democrats submitted two requests for witnesses: Fluke and Americans United for Separation of Church and State head Rev. Barry Lynn. The Republicans made the obvious choice to go with Lynn, the guy with actual credentials pertaining to the hearing’s subject (the contraception mandate’s impact on religious liberty) rather than the college student. Go figure!

Then, with the full backing of House Democrats and the mainstream media, the unqualified Fluke threw a hissy fit about being “silenced” and lied about women being shut out of a discussion about their health…conveniently ignoring the fact that two women did testify at the hearing’s second panel (since they disagreed with the Blessed Sandra, they apparently didn’t count as real women).

Democrats and many Republicans reacted with outrage, and the left made Limbaugh’s slur Exhibit A in what they called a GOP “war on women.”

Yes, and while the people who get paid to conduct actual journalism full-time were busy obsessing over a talk show host being mean to their new darling, some of us were bothering to dig into the testimony that was supposed to be so important for her to bestow upon the world. And what we found was that birth control is far cheaper and more accessible than she claimed, that Georgetown University policy already covers the medical-necessity cases she testified about (with her real complaint being over claims denials that aren’t a concern for the United States Congress), that she was a far-left agitator before discovering that Georgetown is eeevil, and – surprise! – she didn’t have much to say about, er, the religious liberty angle after all.

Fluke, meanwhile, weathered the attention with poise and maturity and emerged as a political celebrity.

Yes, because nothing says maturity like “thirty-year-old college student demanding help paying for birth control.” Or refusing to accept the apology of the guy whose insult you made a national case out of. As for poise, we must have been watching different DNC speeches – the one I saw was bitter, nasty, dishonest, and so self-righteous that pro-choice Democrat Kirsten Powers had to call out Fluke’s lack of perspective about the true freedom women enjoy in America. And celebrity? Tell that to the empty parking lots her adoring public couldn’t quite fill.

Democrats gave her a national-convention speaking slot as part of their push to make reproductive rights a central issue in the 2012 presidential campaign — one that helped Barack Obama trounce Mitt Romney among single women on Election Day.

Single women, yes…but Romney won married women by 7 points and white women overall by 14 points. So it turns out that the fairer sex wasn’t quite so monolithic for Contrapalooza after all, with many analysts concluding that the real determining factors for the election were economic, cultural, and perception issues that cut across racial, not gender, lines.

I understand that this is just a nomination, and the process is meant to separate the wheat from the chaff, but TIME’s Person of the Year award has been a joke for a while now, and it’s hard not to conclude that the editorial instincts underlying it are a contributing factor to the current plight of the print news magazine industry.