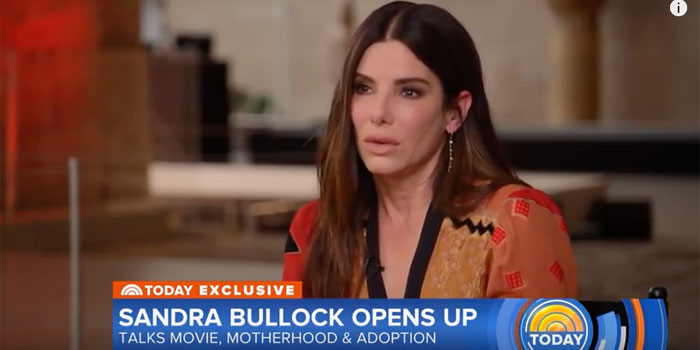 Actress, adoptive parent, and single mom Sandra Bullock opened up recently to TODAY’s Hoda Kotb, a fellow adoptive mother, explaining how becoming a mother through adoption made her realize that it was not her career as an actress that gave her purpose in life, but her children.

Bullock is well-known for portraying Leigh Anne Tuohy in “The Blind Side,” the story of teenager Michael Oher, who later became an NFL football star after he was adopted by Tuohy’s family. Sadly, however, the actress is reported to be signed on to play pro-abortion former Texas State Sen. Wendy Davis in an upcoming film, “In Her Shoes.” Davis, who failed in her Texas gubernatorial bid despite her stalwart financial support from Planned Parenthood, originally became the darling of the pro-abortion lobby thanks to her 11-hour filibuster (in pink tennis shoes) against a law that would have protected pain-capable preborn children from abortion past 20 weeks of pregnancy — children who may have otherwise had the chance of being placed with loving families for adoption.

This is what a preborn child looks like at 20 weeks. Babies this developed — and even more so — are those which Wendy Davis believed women should have the right to kill:

Bullock, of all people, should know that just because a child is unwanted by his or her biological parents doesn’t mean that child is unwanted. After all, she is one of the world’s most famous adoptive parents. Her children were wanted by someone.

Bullock told Hoda Hotb that her priorities in life are “my kids, my kids, my kids. My family. My family. That’s it,” adding that she works less because she wants to be there for her children’s big moments. But Bullock’s apparent support for Wendy Davis’s extreme pro-abortion cause is disheartening. Other people’s children matter, too. Bullock’s children were someone else’s children before she adopted them. And to be adopted, children must first be born.

Bullock speaks glowingly of her adoption experience, adding that for a while, she felt as if her time for children had passed. “Then [Hurricane] Katrina happened,” she said emotionally. “Katrina happened in New Orleans, and I knew. Something told me that my child was there. It was weird.”

“It was… I mean, three, four years later,” after filling out adoption paperwork, that Louis came into Bullock’s life. “… I looked at (Louis), and I just said, ‘Oh, there you are.’ It’s like he had always been there. It’s like he fit in the crook of my arm. He looked me in the eyes, and he was just — he was wise. My child was wise. The beautiful thing that I was constantly told was, ‘The perfect child will find you. You will find your child.'”

But how many families are missing out on the blessing of children — through biological parenting or adoption — because of abortion? According to a 2016 article in The Federalist, “For every eligible baby, an invisible queue of 36 couples waits for the chance to take that baby home.”

Hoda Kotb told Bullock that it was her story that gave Kotb hope to become an adoptive mother herself. “I was trying to figure out, like, did I miss my window? Am I too late? Should I have … a bunch of woulda-coulda’s. And all the sudden, I Googled you,” Kotb said. “… [Y]ou don’t even know who you inspired. You know because I told you, but how many other people looked up and saw you?”

Indeed, Bullock inspired people to adopt. But with the accessibility of abortion, the biological mothers of both Kotb’s and Bullock’s children might have easily made that tragic choice. Again, when we see how precious and amazing these adopted children are, how can we support the “choice” to kill them before they’re born? It’s an illogical disconnect. 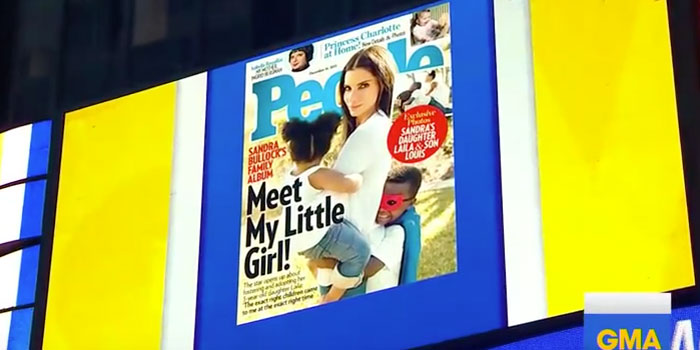 On adopting a second time, Bullock says she believed her son Louis knew before she did that his little sister was going to come into their lives. Bullock recalled a friend discussing her daughters in front of a three-year-old Louis, who told Bullock’s friend matter-of-factly, “I don’t have a daughter, but I’m gonna have a baby soon.” Bullock told Kotb, “And I realized at that time maybe he knew something. And when I think about it, it would’ve been around the time that Laila was born.”

Bullock added tearfully, “There are hundreds of thousands of children that are ready to be your child. You’re a forever parent the minute you accept the love of that child.” But accepting a child begins at conception, at the moment of fertilization. It would be wonderful if Bullock, who has done amazing things for her two beautiful children, realized that every child whose life is taken through abortion is also “ready to be” part of someone’s family.

Accepting the love of a child — no matter the circumstances of their conception — is something that would make the world a better place, indeed. Every child is precious, from the moment of conception.