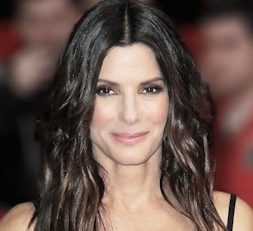 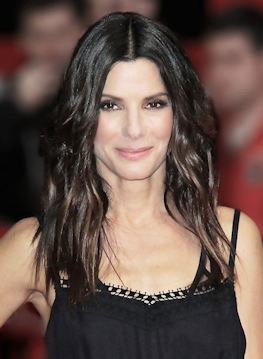 Who doesn’t have a soft spot for Sandra Bullock? From ‘Miss Congeniality’ to ‘The Blind Side’ her funny, sweet performances have captured the hearts of movie goers worldwide. I loved her role as Birdie alongside Harry Connick Jr. in the romantic drama ‘Hope Floats’. The story of a broken lady learning to love again touched my sentimental heart.

Along with being a beloved actress, Sandra is a devoted mom to Louis, an African American boy she adopted from New Orleans in 2010. Sandra named Louis after the famous trumpet player Louie Armstrong who hailed from the same city.

In a recent interview with Vogue magazine Sandra discussed the way Louis has changed her. She said, “Work was my life before. Now I have no reason to leave home”.

She enjoys motherhood so much she told Vogue, “If all of a sudden someone said, ‘You have five more kids,’ I’d be totally OK with it”.

While filming the soon to be released, “Gravity”, Sandra made sure the set was accommodating to little Louis. Producer David Heyman child proofed the set with lots of bumper guards. This helped to put Sandra at ease while working. Juggling career and family life isn’t easy for any mom. Sandra makes it clear to those around her that caring for Louie is her number one priority.

Sandra told Vogue, “I think this business can take the child out of kids so quickly. I don’t want him to have pressures brought on by what I do. I will quit. I will leave. If I see whatever I’m doing affecting him negatively, I will pack up and move to Alaska”.

Sandra is quite protective of her little man. When news first surfaced about Louis it was amiss rumors that Sandra adopted him because she was influenced by her role as Leigh Anne Tuohy in ‘The Blind Side’. Touhy is a Southern mom who along with her husband adopted a Black young man named Michael Oher. Micheal went on to be a NFL player with the Baltimore Ravens. Although Sandra enjoyed her role in ‘The Blind Side’, that wasn’t what inspired her to adopt. Sandra and her ex husband made plans to adopt years prior to her role in the film. After Sandra won a Oscar for Best Actress for ‘The Blind Side’ she was devastated by the news that her then husband Jesse James was unfaithful in their marriage. Sandra divorced James and decided to raise Louis as a single mom.

Reflecting on her painful past she recently said, “We’re all where we’re supposed to be. “I am exactly where I want to be now. You can’t go backward. I’m not going backward. I’m grateful that I’m here, blessed to have what I have. Nobody can be prepared for anything. If you end up in a place where you can look back and go, ‘It happened, but I’m so lucky to be sitting where I am sitting. . . .’ ”

She continued saying, “I’m having such an amazing time. Whatever comes our way, we handle as a family. It’s not just me anymore.”

I’m proud of Sandra Bullock. She refused to let the trials of life destroy her. In the midst of dealing with personal rejection she chose to love a child that needed a mom. I’m also grateful that Sandra was willing to adopt a child with a different ethnic background than her own. Kristen Howerton, like Sandra, is a white woman who along with her hubby adopted two black sons. She wrote an article for the Huffington Post discussing the need to remove racial bias when it comes to adoption. Kristen shared information stating Black babies are the least likely to be adopted and therefore the least expensive to adopt.

It’s important to note that adopting black children is not, in fact, a fad. The truth is that racial bias in adoption preference is very prevalent, with black children waiting the longest to find a family. Here are some numbers culled by Love Isn’t Enough that represent online profiles of adoptive families and what races they are open to adopting:

As for around the globe she says:

Only 7% of internationally adopting parents adopt black children, with most prospective adoptive parents preferring to adopt a child of Asian or Eastern European descent.

Kristen was told at an informational meeting by a California adoption agency that the wait for healthy white infants was over two years because there are so many prospective adoptive parents unwilling to adopt a child of color. Yet in most states there are black children waiting for families.

It breaks my heart to know so many black children are on waiting lists because not all families will accept them. It brings to memory the time a Black abortion doctor looked at me and said, ‘We both know no one wants these black babies’. I didn’t agree with that doctor then and I certainly don’t now. Sandra and Kristen are two out of many that are opening their hearts and homes to babies, regardless of their skin color. In my book that makes for a story with a very happy ending.