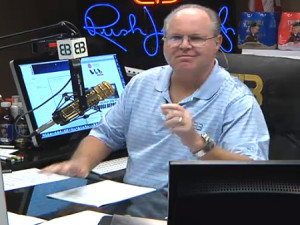 On his radio show Friday, Rush Limbaugh delivered a powerful monologue (transcript, video) asserting that in addition to its innate monstrousness, abortion is “at the root of our cultural decay” as a nation, its impact stretching from respect for life and personal responsibility to crime, immigration, and the economy:

If you use the popularly accepted figure of 1.3 million abortions a year, go back to Roe vs. Wade 1973, 52 million taxpayers haven’t been born, is the way Washington looks at it.  They don’t look at it morally. They don’t look at it in any kind of cultural way or any kind of cultural impact. They just say we’re 52 million people short.  We have 52 million fewer people paying taxes.  We gotta replace ’em.  Hello amnesty.  The Democrat Party needs a permanent underclass in order to keep themselves alive as Santa Claus, to keep winning elections and stay in power […]

I just want to tell you something.  I really think that abortion is at the root — you could do a flowchart — I think abortion is at the root of so much that has and is going wrong in this country.  I think that the number of abortions themselves, but what in toto it all means, culturally, in terms of the sanctity of life, how that’s crumbled, I think it’s almost at the root of everything.  And if it’s not at the root of everything, it’s clearly had a profound impact on our culture, our society, and our politics, I think in ways that people don’t even stop to consider.

None of it good and it’s caused all kinds of horrible problems that nobody knows how to fix.  Because they refuse to even accept that abortion is more than what it is.  To most people, it’s just a woman’s right to choose, and it’s nobody’s business, and leave it alone and I don’t want to talk about it.  But it’s really had much more impact on this country than just that.  It’s had impact on crime.  It’s had a profound impact on our politics.  It is at the root of our cultural rot and decay.

You can trace the problems with accepting personal responsibility, no consequences for your actions, you can trace so much right back to it.  And I’m not talking about the women.  I’m talking the overall effect of a society having literally no problem with eliminating 52 million of its citizens.  That can’t be good […]

I don’t know how you can have so much white guilt over slavery 150 years ago and have no guilt over what’s happening with abortion.  I really don’t.  I think it is the cause of so much that seems to be inexplicable to people.  Why are 10-year-olds shooting each other to death in Chicago?  Why is our society so permissive, anything goes, the more ribald, the better?

As an example of just how far we’ve fallen, Rush pointed to the utter unwillingness of Nancy Pelosi, leader of House Democrats, to explain the moral difference between Kermit Gosnell killing a newborn and aborting a baby of the same age before birth. When a former speaker of the House of Representatives, one of the highest offices in the land, calls ending infanticide “reprehensible” and feels no obligation to even pretend she cares about the answer, it’s hard to deny how much our national conscience has dulled.

Rush is absolutely right; in fact, he could have gone a lot farther. Last July, our own Mitch Behna found that the United States’ birth rate isn’t quite meeting our replacement level and that without the percentage of the population taken by abortion, Medicare and Social Security are short $11 billion and $47 million, respectively. Economist John Lott has demonstrated that, contrary to claims popularized by the dubious book Freakonomics, the legalization of abortion likely led to an increase in violent crime. Forbes contributor Bill Flax puts the lie to the popular talking point that abortion is necessary to stem out-of-wedlock births, noting that actually, the opposite has happened. Professor Michael New has linked abortion’s legalization to an increase in child abuse.

It’s not hard to see the shapes taken by the fallout of these social ills – educational failure, poverty, dependence, sexually transmitted diseases, social alienation and resentment.

Take a broader look around us today, and abortionism’s worst siblings are readily apparent. It is increasingly respectable to entertain ideas about neglecting and eliminating our elderly and disabled countrymen. Parental neglect that would have been unthinkable a generation ago almost becomes something you can set your watch to. Slavish devotion to pointless regulation can win out over a little girl’s fight to survive. You can advocate doing nothing about doctors starving newborns to death in closets and still get elected leader of the free world.

Rush Limbaugh scratched the surface of a discussion the country desperately needs. As the country is preoccupied with economic malaise and immigration uncertainty, he should be commended for reminding us that, as abortion is a outright rejection of the first truth of our country, it cannot help but upset the balance of everything else.