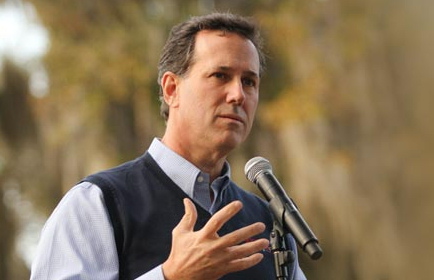 Earlier this month, I sat in a Denver, CO conference room eager to hear former Senator Rick Santorum speak. Santorum was an honored guest at the 2013 CareNet National Pregnancy Conference. He came to share encouraging words with leaders and staff workers from hundreds of Pregnancy Resource Centers across the country.

It was my first time hearing Santorum speak in person. Watching televised speeches and interviews gave me a glance into his heart. I admired the way he cared for his daughter Bella and was inspired by his stand against abortion.

I was struggling with feelings of failure the night before Santorum spoke. I felt ashamed because of situations in my life where I desired to share truth with others but let fear silence me. When Santorum mentioned failure and fear, I paid attention. He talked about a time in his life when he was afraid. He was afraid to speak out against abortion while in the Senate. People told him if he did, his career would be over. They would label him as a ultra conservative freak or religious nut. For a while he remained silent. Then it got to a point where he couldn’t be silent any longer.

Partial-birth abortion was being debated, an act so gruesome and utterly offensive it demanded a voice to fight against it. Rick became that voice. In 1999 he debated a Ban on Partial birth abortion with Barbara Boxer. Not an easy or pleasant feat, but he did it well. This is one of the most heartfelt and honest speeches against abortion I’ve ever heard. He sounds like a modern day William Wilberforce.

One debate with Boxer on Partial Birth abortion lasted 6 hours. The vote was to be taken the next morning. After 6 hours Rick still had to more to say. He went back out before two people and a TV crew and spoke for an hour and a half about disabled children and abortion. He finished the debate and went home to wait. The next morning he got the devastating news that they loss by two votes. Rick said he felt like a failure, as both a leader and father.  He felt guilty for taking time away from his wife and children to fight a losing battle.

Five days later Rick received an email from a college student at Michigan State Univ. The man said his girlfriend and him were sleeping on the couch, flipping channels when they stopped at Rick’s speech on CSPAN. As they listened the man turned to his girlfriend and saw tears running down her face. “I’m pregnant”, she said. “I had an abortion scheduled in a few days but I’m not going to go through with it now”. This young man told Rick, “You may have lost the vote to override President Clinton’s veto that day but you saved the life of my child”.

I wept when I heard that story. Rick told us we’re winners in the fight for life. Even when we feel like we’ve failed we’re still making a difference. In 2005 I lived in Washington, D.C  with a company of young people at the Justice House of Prayer who prayed  for governmental leaders to oppose abortion. In one season most of that company was stationed in another location. Their were just three of us left in D.C who went to the Supreme Court to pray. Tiffani, Marybeth and myself. We stood in front of the marble steps, waved to the police offers and prayed earnestly. At that point we had one main request. We prayed for the Ban on Partial birth abortion to pass. Others were praying with us. A YMAM team in D.C, our intercessors friends in South Carolina and people around the nation. Although we stood as 3 girls in front of the Supreme Court we represented thousands of voices.

That was a hard season for me. I failed often during that time. Yet I kept praying and believing my voice counted in heaven. I was privileged to be praying at the court when news broke that they upheld a federal law banning Partial birth abortions. A newspaper snapped my picture. If you look closely you can see tears rolling down my face. It was a moment of victory. 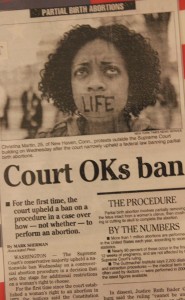 We all feel like failures at times. In the fight to end abortion it can often seem like we’re Davids before the Goliath of government or Planned Parenthood. In moments of uncertainty remember your voice counts. Your making a difference and daily winning the battle for life. Clinics are closing, laws are changing, babies are being saved, men and women are confessing abortion has hurt them. Rick thanked us for the work we do. I want to thank you. Don’t lose hope, you’re on a winning team.