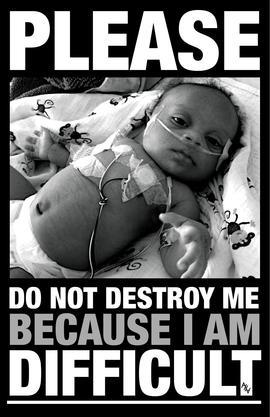 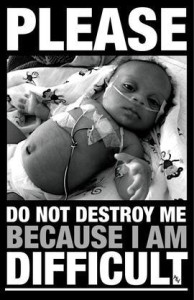 If pro-aborts tackled the true prevention of unwanted pregnancy with the boundless determination they apparently put into fresh, innovative ways to be hypocrites, maybe the abortion debate would be all but over by now.

At RH Reality Check, Annamarya Scaccia delivers a surprising, scathing critique of “Feminism’s Ableism Problem,” arguing that a significant portion of her fellow travelers are guilty of everything from using “ableist rhetoric” to “disregard” for a litany of plights the disabled face, like poverty and discrimination.

So feminists are insensitive to the rights and welfare of people whose physical condition leaves them weaker and more helpless than the rest of us? Gee, where have I heard that before…

Oh yeah, that’s it! The most egregiously disregarded group of such people in our country, the millions of unborn babies who are legally killable on demand, are so disregarded because their subjugation is the single most animating desire of what passes for feminism today.

These so-called feminists tell us that awareness, pain sensitivity, ability to survive outside the womb, and lesser quality-of-life projections all make a fetus’s destruction morally permissible. Others on the very site Scaccia is using to champion the disabled have argued that not only are the disabled better off dead, but that Mom should be able to make that decision unilaterally for them, before they’ve had the slightest chance to judge life for themselves.

Indeed, Scaccia opens her piece by discussing Neal Carter, a man with spina bifida who created the #SolidarityIsForTheAbleBodied campaign to raise awareness that the world “is not built for the disabled community”…just weeks after another writer argued that the very same condition necessitated aborting her unborn daughter, and that anyone who disagreed was coldhearted. And that’s not the only class of undesirables for whom Scaccia’s allies deem abortion not only acceptable, but noble. Other surmountable conditions pro-aborts think make people lost causes include Down Syndrome and even dwarfism (hey, you think Peter Dinklage wishes he’d been aborted?).

Scaccia’s column clocks in at over 1,600 words. You’d think somewhere in the time it took to plan, research, and write it, some of this would have occurred to her. Well, she does make one reference to abortion—and comes out on the side of the disregarders by complaining that it’s not easy enough for disabled abortion-seekers to have their unborn, helpless, dependent babies killed.

But no, those victims aren’t worth her time, because she’s too busy complaining that people use words like “lame,” “crazy,” and “insane” as insults. Needless, overly-defensive inferences from commonly-understood language are the real injustice! (That’s not to say none of the issues she mentions are legitimate, but come on.)

One RH commentator dared to notice this blind spot:

Ableism against people with disabilities actually starts in the womb. That’s where otherwise wanted babies are terminated in massive numbers if they are discovered to have a disability. For example the NYT recently reported that over 90% of otherwise wanted babies are aborted if they test positive pre-natally for Down Syndrome. Statistics are similar for spinal bifida and other trisomies, and also quite high for cosmetic anomalies such as clubfeet and cleft lip. It’s another critical area where those of us living with disabilities and “feminists” as defined here part company.

In response, another commenter outed him/herself as part of the problem:

Forcing life on disabled fetii is cruel and inhumane. Only the parents can decide if they are capable of raising a disabled child and giving it the highest quality of care. Not everyone has the resources. Life at all costs is inhumane and cruel. It is not for the disabled child – it is for everyone else and their neuroses regarding fear of non- existence.

“Neuroses regarding fear of non-existence.” For every PR-savvy pro-abort who strives to not sound like a monster, it seems there’s another waiting in the wings to demonstrate that the whole subject of life and death is something they just don’t take all that seriously.

Scaccia closes by quoting deaf rights activist Agness Chindimba as saying, “Disability and issues affecting disabled women do belong to the feminist movement. … We cannot afford to leave out other women because they are different from us.” Tragically, today’s feminist pretenders define progress in that area by “leaving out” the youngest of those who “are different from us” in some of the most brutal ways imaginable.