I know a few pro-choice people who believe that the unborn are not yet human persons, and so abortion is not murder but instead is just a medical procedure. I am sure that there are quite a few others pro-choicers who believe the same.

If we are to take a look at some abortion procedures, though – procedures so violent and invasive as to defy belief – it doesn’t seem like there is any reason to perform such a procedure without the direct intent to kill something, or someone. Other surgical procedures may involve the removal of what is causing the body harm, but there is just something so different and chilling about the different types of abortion. And lest we forget, abortion is an elective procedure.

Priests for Life has many great galleries, pages, and videos on the different types of abortion. There is also a LifeNews article from a few years ago that goes over different abortion procedures, as well as how far developed the unborn child is when certain surgical abortions are performed on him or her. Please feel free to turn to these sources for more detailed information and to see where I got mine. The various bits of emphasis added below are mine, to highlight the violence involved in such procedures.

A suction aspiration type of abortion is very common in the first trimester. The mother’s cervix is dilated so that a cannula, a hollow plastic tube, can be inserted into the uterus. It is connected to a vacuum pump. This vacuum suction is 29 times more powerful than a household vacuum cleaner, as mentioned in the LifeNews article. And as Priests for Life mentions,  “[t]he abortionist runs the tip of the cannula along the surface of the uterus causing the baby to be dislodged and sucked into the tube – either whole or in pieces.” The amniotic fluid, placenta, and other body parts are then also sucked out and collected in a jar.

A suction curettage type of abortion involves a curette, a hook-shaped knife. The curette scrapes out the uterus for any more parts, and a suction machine goes through the uterus once again to make sure all parts have been removed. 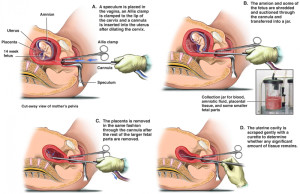 Here is how the LifeNews article describes a Dilation and Evacuation, or D&E abortion:

… a pair of forceps is inserted into the womb to grasp part of the fetus. The teeth of the forceps twist and tear the bones of the unborn child. This process is repeated until the fetus is totally dismembered and removed. Usually the spine must be snapped and the skull crushed in order to remove them.

Priests for Life also has a page with more detailed information on the procedure.

After 16 weeks, a needle full of a salt solution is injected through the mother’s abdomen so as to reach the baby’s sac. The baby is not merely poisoned when he  swallows the solution; rather, his outer layer of skin is also burned off. The baby will also not die right away, as it usually takes over an hour for him to die. The mother usually gives birth to a dead or dying baby before 24 hours later.

Chemicals are injected into the amniotic sac, and prostaglandin is inserted into the vagina. The uterus contracts intensely to push out the baby. These contractions are not only more intense than normal contractions, but also quite violent. These contractions by the mother crush the baby and often kill the unborn child in delivery, and have even decapitated some.This method is not frequently used today, as the above D&E procedures is now preferred. This form of abortion, now illegal, is also known as the partial-birth abortion. The procedure takes place in five steps, with the abortionist first grabbing the baby’s legs with forceps. Next, the baby’s leg is pulled out of the birth canal. The entire body is then delivered, except for the head. The abortionist then jams scissors into the baby’s skull. The scissors are opened to enlarge the skull. And lastly, after the scissors are removed, a suction catheter is inserted. The baby’s brains are sucked out and the skull collapses. The dead baby is now completely removed.

An abortion – and particularly a surgical abortion – is much more than just a procedure. The website for American Pregnancy is very vague on abortion procedures, though, including only a sentence or two, and with no such description as these pro-life websites include.

Many will criticize pro-life sources as being biased. However, despite any such pro-life viewpoint, a bias is hardly necessary to consider when such sources are the ones to tell the truth. And as Priests for Life proclaims, we must tell the truth about what an abortion really is. There may be pro-choice people who hold such an opinion because they have never been told what really happens during an abortion – at least not to the unborn child being killed.

Rather than being just another surgical procedure, an abortion is the act of deliberately and violently sucking out and dismembering a human being who now will never get the chance to be born. To terminate the life of a defenseless and innocent human being in such a violent manner is not only immoral and unnecessary, but plain barbaric. The abortions which occur later in pregnancy are also performed on babies that could theoretically survive outside the womb if born at that point. Except these babies are being purposefully murdered, so we will never know if they would have survived had they merely been born prematurely.

Despite the violent involvement, such procedures are more advocated as a woman’s “right” or “choice” than described for what they really are. Why is it that there are those who believe that women can have “rights” and “choices” only when they are allowed to have their children not only killed, but killed in ways that could hardly be more cruel? Aren’t the death of an innocent life and the emotional harm to his or her mother bad enough without the use of such violence? I truly wonder. It’s bad enough that pro-choicers out there deny that an abortion is murder, but they continue to do so even when the carrying out of an abortion is such a violent form of murder.