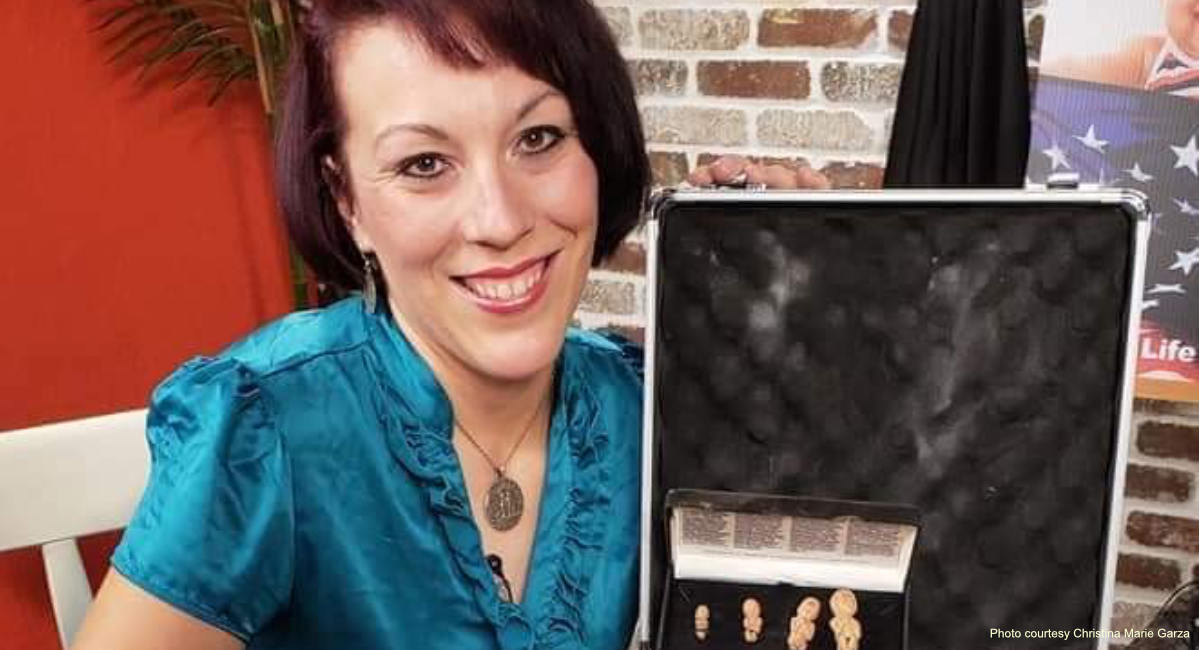 Shortly after returning home from her honeymoon, 20-year-old Christina Marie Garza discovered she was pregnant. Both she and her husband were excited, but the news was especially meaningful for Garza’s husband, whose former girlfriend had chosen to abort their child over his objections. Garza’s husband later named his child, lost to abortion, “Jacob.”

Influenced by Catholic pro-life parents and grandparents, Garza learned to value life and knew no matter her circumstances, she would never consider abortion. “I knew how much my husband was still hurting after losing his child,” she told Live Action News. “So, we were thrilled to learn of my pregnancy even though we had been married such a short time.”

But Garza soon discovered that not everyone would revel in her happiness. At the time, she was employed as a caregiver for a woman’s disabled grandchildren through an employment agency. Suspecting the woman might not be pleased about her pregnancy, she submitted a two-week notice to the agency. She was offered another a part-time position which she eagerly accepted, though it meant less pay. But she couldn’t leave soon enough.

“One day, my husband and I were on a phone call talking about preparations for our baby,” Garza said. “The woman overhead our conservation and began berating me and threatening to let me go if I didn’t abort my child. She didn’t know I was leaving in two days and thought she had so much control over me. I was relieved to get away from her vitriol.”

As she experienced severe nausea early in her pregnancy, a friend began pressuring her to have an abortion. Although annoyed, she ignored the “advice” knowing her symptoms would eventually subside. During her second pregnancy, the same friend would again urge to abort her child. Stunned at her callousness, she finally ended the friendship.

“My father had recently passed away from bone cancer and I was grappling with my grief along with morning sickness,” Garza said. “This person felt the best way to deal with my depression and nausea was for me to have an abortion. She grew up in a family that had a twisted belief that abortion was the solution to alleviating morning sickness.”

A 30-year-old family secret is revealed

Soon Garza would put her pro-life principles into action. Her mother, who led a pro-life ministry at church, introduced her to the 40 Days for Life outreach. She participated in the March for Life and Walk to Jericho. Until then, she had always thought the prominent Planned Parenthood Surgical Center in Albuquerque, New Mexico, just provided birth control and pregnancy tests. She quickly realized Planned Parenthood did much more to harm women than to help them.

She told Live Action News, “I was devastated to discover that the Albuquerque PP performed abortions up to 19 weeks and that New Mexico is known as the late-term abortion state. Later, my husband told me this was the facility where his ex-girlfriend aborted their child.”

But little did she know that the same Planned Parenthood would also have a dark place in her own family’s history, as a 30-year-old secret was inadvertently revealed one Sunday afternoon during a family luncheon.

“My teenage sister made a careless comment that women never regret having an abortion. I remember a look of sadness and pain come across my mother’s face, and she started to cry,” Garza said. “She shared that prior to her marriage, she got pregnant and was pressured to have an abortion by her boyfriend, who she described as a womanizer. When she resisted, he threatened her life.” Submitting to weeks of pressure and threats, Garza’s mother finally underwent the abortion at the Planned Parenthood in Albuquerque, alone and afraid.

For 30 years, it was a secret Garza’s mother had shared only with her husband. Garza’s heart filled with compassion for her mother, with whom she had struggled to form a close bond. “My mother and I had a rocky relationship throughout my childhood,” she said. “But I suddenly understood the heavy burden she carried for so long. I could see how hard for her it was to share her story. It was a bitter moment, too, when I realized both my husband’s child and my mother’s child died at the hands of abortionists at the same Planned Parenthood, a place responsible for so much loss of life.”

Throughout her marriage, Garza’s mother had suffered five miscarriages, thinking it was retribution for her abortion so many years before. When she was eight weeks pregnant with Garza, she was told by her obstetrician her baby had no detectable heartbeat and was advised to have a D&C procedure to remove her miscarried child. But this time, she refused, believing the doctors were wrong. Instead, Garza’s parents prayed steadfastly — and at the 12-week ultrasound, saw and heard their baby’s heartbeat. Garza’s parents fired that doctor and got a new one who was pro-life.

Since her involvement in the pro-life movement began, Garza has felt God urging her to do more. In 2019, she helped to found the Cherub Initiative in honor of her husband’s aborted son Jacob and her aborted sibling Gabriela. The New Mexico-based pro-life organization seeks to offer alternatives other than abortion to pregnant women through advocacy, outreach, and emotional support.

“To-date we have handed out 4,000 Mommy Hope bags during at our sidewalk outreach and have saved more than 300 babies from dying at the hands of abortionists,” Garza said.

Wanting to further her pro-life education, Garza became a Live Action Ambassador in July 2020, and attended the Pro-Life Training Camp in San Francisco where she met Live Action founder and president Lila Rose. She is grateful to have established a deeper relationship with her mother, and both her husband and mother have found healing through Rachel’s Vineyard and Silent No More Awareness. Garza and her family look forward to where God directs them next in their pro-life journey.