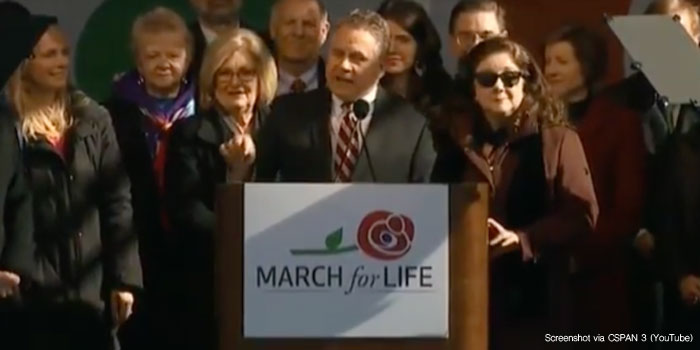 In his brief address, Smith called attention to atrocities within the abortion industry, specifically mentioning a recent NPR piece in which former Planned Parenthood manager Annette Lancaster stated, “I just now started being able to use the deep freezer in my home by going through [therapy], because we used to call the freezer the ‘nursery’ … And we used to think that was funny,” she says. Smith says this abortion facility freezer, or “nursery,” contained the bodies of unborn babies.

Smith, who is co-chairman of the Congressional Pro-Life Caucus, described pro-life efforts as “the greatest human rights struggle on the face of the earth,” and the pro-abortion movement as “Orwellian.” He also drew attention to the pro-life movement’s strong efforts to reach out to and support women, including those who have had abortions. Women who have had abortions and are now speaking out in favor of life are the new face of the pro-life movement, says Smith.

Smith also noted that the Born Alive Abortion Survivors Protection Act, passed by the U.S. House today, “ensures that the cover up that goes on… in abortion clinics when personnel look the other day when a child is actually born and then left to die due to exposure or to an actual killing, including strangulation, that they will now be compelled under penalty of law to report that, so that those who commit these crimes can be prosecuted.”

In addition to a long history of pro-life work in Congress, Rep. Smith has been responsible for authoring significant legislation fighting against human trafficking while protecting victims, as well as legislation benefiting individuals with disabilities, and legislation benefitting veterans.