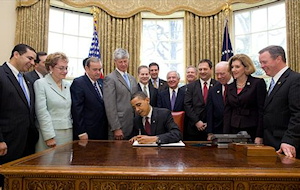 I was at yesterday’s Congressional oversight committee hearing which was convened to investigate top officials at the Health and Human Services (HHS) Department who chose to deny a grant allowing the US Catholic Bishops to help victims of human trafficking because the Catholic group refused to refer victims to receive the “full range of gynecological services” (a euphemism for abortion and contraception).

One of the most powerful moments of the questioning period came when Congressman Chris Smith had his turn with the microphone. As he explained at the hearing, he was the original author of the legislation (Trafficking Victims Protection Act of 2000 or TVPA) that created the HHS grant program to provide resources to organizations (such as the US Bishops) who run programs that help victims of human trafficking. He was outraged to discover that in the most recent round of grants pro-abortion political appointees at HHS had effectively injected a pro-abortion litmus test which bars pro-life organizations and NGOs from receiving grant money.

In an opinion article he published at LifeNews, Congressman Smith writes:

Why go through the charade of determining whether or not a grant application is meritorious when preferential treatment is afforded only to those in sync with President Obama’s abortion promoting agenda?

The bottom line is this: pernicious pro-abortion favoritism, embedded in this egregiously flawed process, does a grave disservice to the victims of trafficking. Victims deserve better. The women and children who have been exploited by modern day slavery need our help, which is why I wrote the law in the first place.

He couldn’t be more right that “Victims deserve better”! As LiveAction has shown with documentation time and time again, pro-abortion organizations like Planned Parenthood are eager to aid and abet the perpetrators of sex-trafficking, putting their victims in even more danger.

As Steven Wagner, a previous director of the HHS  program for trafficking victims wrote in response to this controversy, preventing pro-life organizations and NGOs from caring for the victims of sex-trafficking leaves them vulnerable to organizations with a pro-abortion ideology that can put them even more at risk of further exploitation, as Wagner explains:

… So, on the one hand, we have the [Catholic Bishops], which will never facilitate an abortion but will arrange to meet all of the other appropriate service needs of victims, from residence to medical and mental-health treatment. On the other hand, we have an abortion provider such as Planned Parenthood, whose staff have been videotaped as being willing to perpetuate the apparent sex slavery of a juvenile by arranging for an abortion and not reporting the suspicion of felony sex abuse of a minor to authorities. Which is acting in the authentic interests of the victim?

That’s not a hard question to answer: clearly not Planned Parenthood. The US Bishops, on the other hand, have an excellent track record when it comes to caring for sex-trafficking victims. Congressman Smith mentions in his article that HHS’ own review process rated the Bishops’ program a stellar 89 yet decided to give funds to groups that scored 74 and 69 respectively.

When it comes to giving women all that they deserve, the compassion and charity of Catholic and other pro-life, faith-based organizations is the answer. Not the pro-abortion ideology currently embraced by so many powerful individuals in our government.