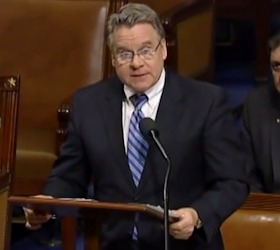 This January, Americans remembered the tragic Supreme Court case of Roe v. Wade, and how it radically changed America through legalization of abortion on demand. In anticipation of the anniversary, pro-life members of Congress gathered to make short statements regarding the ruling and its injustice towards both women and pre-born American children. Below are a few of the statements with excerpts; the full collection of 22 incredible statements can be found here. We’ll highlight several in the coming days.

The first statement comes from Rep. Chris Smith, a Republican from New Jersey. Smith calls upon Congress to consider the scope of abortion’s impact on America since 1973, and how the government is to be held accountable for the need to turn the tragedy around. Smith points out that the death toll thus far is the same as England’s entire population, and that the 41 years that have gone by should not dull our cognizance of the fundamental inhumanity that Roe v. Wade condoned when it legalized abortion.

Forty-one years of victims, dead babies, wounded women, shattered families. Forty-one years of government-sanctioned violence against women and children… a staggering loss of children’s precious lives, a death toll that equates with the entire population of England. The passage of time hasn’t changed the fact that Abortion is a serious, lethal violation of fundamental human rights, and that women and children deserve better, and that the demands of justice, generosity, and compassion require that the right to life be guaranteed to everyone. Rather than dull our consciences to the unmitigated violence of abortion, the passage of time has only enabled us to see and, frankly, better understand the cruelty of abortion and its horrific legacy.