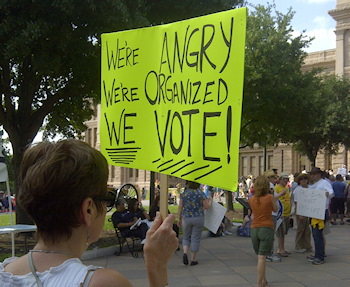 Ten years ago, the abortion movement experienced the only march in its history that ever paralleled Washington, D.C.’s annual pro-life March for Life. Apparently, something about ripping little people apart limb from limb just doesn’t get that many Americans fired up enough to travel to the nation’s capital during its beautiful springtime season to show how much they love baby-killing (oops, I mean “women’s reproductive rights”).

Participants in this so-called “March for Women’s Lives,” which was a decade ago today, were primarily protesting the recently passed ban on partial-birth abortion. (Today, late-term abortions still occur in incredibly gruesome ways, but this particular method was outlawed during the Bush administration.) The partial-birth abortion method involved delivering a live baby’s entire body, except for his head. While the head was still in the birth canal, the abortionist would stab the baby’s skull with a sharp object, often scissors. The baby, whose body had been squirming and whose legs had been kicking, would fall limp in death and be pulled the rest of the way out of his mother and discarded. Hundreds of thousands of Americans came to Washington to demonstrate their dismay over this abortion method being banned by President Bush. Because, apparently, women’s lives were worse off without their “right” to kill their offspring this way.

In keeping with longstanding anti-life traditions, groups like the NAACP, Planned Parenthood, NARAL Pro-Choice America, and the ACLU sponsored the event. Former NARAL president Kate Michelman said at the time: “We’ve been on a journey for freedom for American women, and this march is another step along that long journey.” According to Jo Freeman, a pro-abortion activist who recapped the March in a column the following day, the March for Women’s Lives was viewed as the first of many such marches to come:

Organizers intend that this march be only a beginning. Volunteers collected names and addresses of everyone there willing to sign a sheet. This will make a massive fundraising and voter mobilization list.

Despite the large turnout at the 2004 event, the movement has failed to repeat an event like the March for Women’s Lives, and has been losing momentum ever since. This likely has much to do with a lack of enthusiasm among the next generation. The youth did not carry on the legacy of the once-fiery “women’s rights” movement when that movement became obsessed with abortion rights. And it isn’t because youth today are less convicted about social issues in general.

On the contrary: as the youth trend downward on abortion activism, their pro-life involvement has spiked and exploded in the last decade. Students for Life of America, for example, is involved with pro-life students on over 750 college campuses nationwide. Grassroots pro-life groups like Texas Right to Life have exploded with youth interest, leading to overwhelming participation in its pro-life college fellowships, and summer camps for even younger students.

Anti-life forces in the U.S. have had their last hurrah, but their voices won’t be eradicated from the nation until abortion is abolished for good, so we can expect to continue to see numbers grow at the annual March for Life every year in Washington, D.C. And on that note, it’s never too early to begin planning your trip.