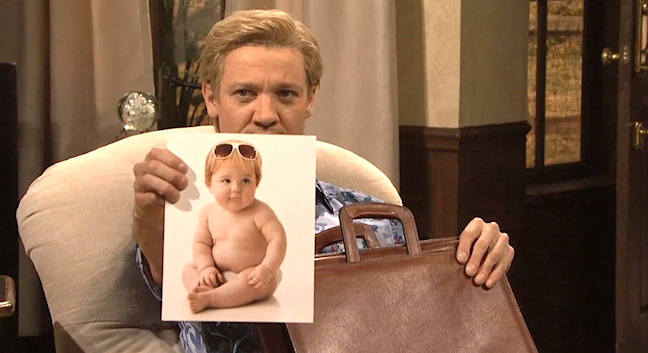 The most recent episode of “Saturday Night Live,” hosted by Jeremy Renner, featured a recurring sketch known as “The Californians.”

Now, I find Jeremy Renner very appealing, and I am a fan of the “Californians” sketches that SNL has done in the past. About halfway through, though, I was particularly struck by the comment made by Jeremy Renner’s character, a lawyer, in response to another character, played by Fred Armisen, having just found out that he is actually a father. After Armisen’s character expresses uncertainty stating that “that really complicates my life” and wondering, “What am I going to do with a baby?,” Renner’s character tells him “[j]ust go easy, Stuart. Remember, you were once a baby too.”

Now, I am in no way saying that “Saturday Night Live” or this sketch is or was meant to be taken as pro-life. I myself was in a pro-life mindset while watching this episode, as I had just been on my pro-life tumblr blog. But as I started to think about it, even in the context of a comedic sketch (which was pretty funny, especially after the actors kept losing it themselves), such a statement was quite sobering.

It does not matter that “Stuart” is a fictional character in a sketch created by “Saturday Night Live,” because we non-fictional characters were also all once babies. Now, the baby mentioned in the sketch has already been born, but this baby, and all other babies, and all of us living today, were once in our mothers’ wombs. We all started off this way.

That’s why I will admit that it boggles my mind as to what pro-choicers think is in the womb. When a man and woman have sex, sometimes they conceive life. And human persons conceive and give birth to other human persons. Yet some pro-choicers think that this new life is just a clump of cells, or act like it’s just some evil creature and compare an unborn baby to a parasite, or say that “it” is a violator of the mother’s womb. Yet all of us started off in and grew and developed in our mothers’ wombs. And we were all human persons, with so much potential, regardless of how others might have seen us. And despite pregnancy being viewed as such by some people, it still raises the question: how else are people supposed to procreate, to continue family lines and the human population?

It is sad and incredible to attack a baby, who is vulnerable, innocent, and defenseless, but with so much potential. Not only are such pro-choicers who do so calling this developing human person names, but they seem to forget that we all started off this way, themselves included.

Now, I’m not saying that pregnancy or finding out you have fathered a child is a walk in the park. But once we all come to realize that what is in a mother’s womb is more of a who than a what, and is in a state of development we all were once in, we are able to humanize and connect that much more with the unborn. So just think back to cool California dude lawyer Jeremy Renner with his piece of advice to “[j]ust go easy.” “Remember, you were once baby, too.”