In The Coming of the Third Reich, hailed by the Atlantic Monthly as “the definitive English-language account,” Cambridge historian Richard Evans outlines the various philosophies which undergirded the Nazi regime.  Among many others, he points to thinkers such as Ernst Haeckel, who openly advocated killing the mentally ill, and Alfred Ploetz, who believed a panel of doctors should attend every birth to determine if the baby was fit to live.  As Evans proceeds to explain,

Such a technocratically rationalistic approach to population management presupposed an entirely secular, instrumental approach to morality.  Christian precepts such as the sanctity of marriage and parenthood, or the equal value of every being endowed with an immortal soul, were thrown out of the window….Fundamentally, racial hygiene was born of a new drive for society to be governed by scientific principles irrespective of all other considerations. (p. 38)

Today, the racial component of such an ideology has been swept away, but the drive for a society “governed by scientific principles” irrespective of religious dogma remains strong.

In recent months, attempts have been made in America to outlaw the medical procedure described below:

These attempts have been met with furious opposition.  Often, this opposition is based upon the belief that religious dogma should not have any influence on legislation.  Perhaps the crudest expression of this view was presented by the young girl pictured below. 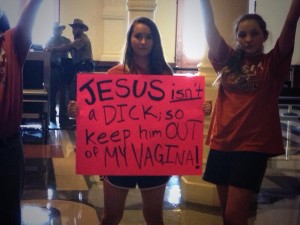 However, there is an obvious problem with such an approach:  if we reject “Christian precepts” and rely only upon “scientific principles,” late-term abortion is not the only activity that becomes permissible.

As an engineer in the aerospace industry, I had the opportunity to see some very large and expensive scientific instruments.  I remember in particular standing inside the largest wind tunnel in the world, located at NASA’s Ames Research Center.  In all my work, however, I never encountered an apparatus capable of measuring right and wrong.  Moral values cannot be measured in a laboratory, only causal relationships.  In other words, science tells us which actions produce which results.  But which results should be preferred?  Which actions are permissible?  Science can give no answer to such questions.

If we reject the notion that all human beings have intrinsic and inestimable value, we cannot object to the procedure described in the video above.  But neither can we object to the procedures described by Ernst Haeckel and Alfred Ploetz.  In short, a morality based only upon “scientific principles” is a morality without bounds.   If we believe we can build a humane and compassionate society upon the same presupposition which undergirded National Socialism, we are gravely mistaken.