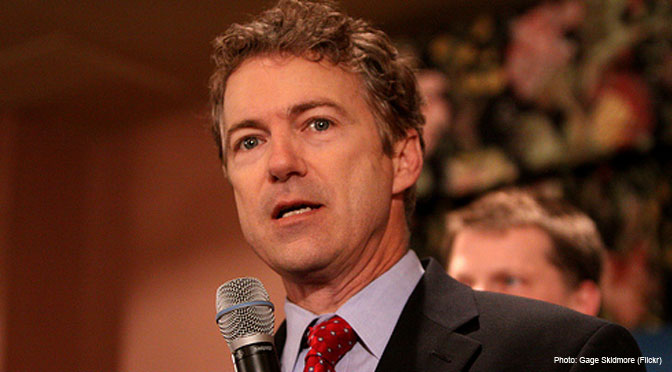 Last week, Rand Paul introduced a pro-life bill he’s grown associated with over the past several years, the Life at Conception Act, which affirms that the preborn qualify for equal protection under the Fourteenth Amendment, into the current session of the Senate, declaring:

The Life at Conception Act legislatively declares what most Americans believe and what science has long known – that human life begins at the moment of conception, and therefore, is entitled to legal protection from that point forward. Only when America chooses, remembers, and restores her respect for life will we rediscover our moral bearings and truly find our way.

Also signing on as Senate cosponsors are Republicans Mike Crapo and Jim Risch of Idaho, and Jim Inhofe of Oklahoma. In the House, Republican Congressman Alex Mooney of West Virginia introduced the LCA last March; there it currently boasts 132 cosponsors, including one brave Democrat, Congressman Collin Peterson of Minnesota. Hopefully it’s only a matter of time before it grows to comparable numbers in the Senate.*

As I’ve written before, the LCA is the most logical measure to become the new centerpiece of pro-life legislative efforts. The Pain-Capable Unborn Child Protection Act, while valuable for exposing the extremes of pro-abortion cruelty, would only touch a small percentage of abortions, and the future of the Supreme Court is much too uncertain to wait for it to reverse Roe v. Wade while babies are dying here and now. On the flip side, persuading supermajorities in two thirds of the states to add a Human Life Amendment to the Constitution is simply unrealistic.

But the Life at Conception Act circumvents all of that, and does it while confounding pro-aborts’ own conventional wisdom. It trumps Roe with Roe’s own admission that scientific proof of life beginning at conception would guarantee preborn babies’ constitutional rights. It can be enacted via simple Congressional majority, which the public is already ready for. It avoids getting bogged down in hysterics over rape exceptions by restoring the states’ right to vote on abortion rather than directly criminalizing it. And it would force an actual discussion about the content of Roe and the interests of the people abortion kills.

Most importantly, it would progress the conversation among pro-life politicians beyond generalities about defunding Planned Parenthood and promoting “cultures of life.” Ted Cruz and Mike Huckabee are also on the record in favor of invoking the Fourteenth Amendment to legislatively end abortion. We need all our candidates and elected officials on the record with specific commitments as to how they intend to end abortion in the long term. How many have a plan they intend to proactively pursue, and how many are just reacting to controversies as they arise by doing just enough to stay in our good graces? More high-profile coverage of the Life at Conception Act could be instrumental in identifying the posers from the champions.

Granted, bills are introduced all the time without going anywhere. The LCA has been introduced many times over the years (although its list of cosponsors has steadily grown). But this time might be different; Paul used Senate Rule 14 to skip the committee stage — where countless pieces of legislation go to die — and place it right on the Senate calendar. That doesn’t necessarily guarantee a vote, but it does make it available for consideration on the Senate floor and get other procedural roadblocks out of the way… meaning that if Mitch McConnell wants it blocked, he’ll have to take responsibility for doing so.

Either way, the legislative campaign against abortion needs to advance to the next level. And Rand Paul deserves credit for taking the first step there.