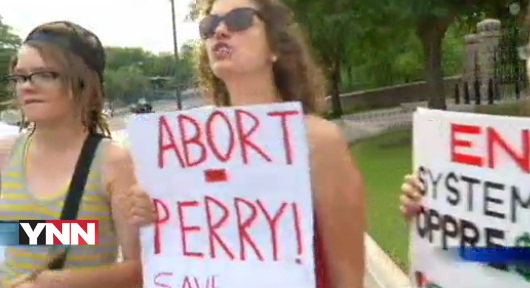 Yesterday a group of protesters organized by the National Organization for Women-endorsed group Unite Women rallied at the Texas state capitol. They were unhappy about recent funding cuts to abortion giant Planned Parenthood as well as Texas’ new “ultrasound before abortion” requirement.

Video from YNN shows a small group of around 9 people in attendance with various signs, including one stating “ABORT PERRY!” in obvious reference to pro-life Texas Governor Rick Perry.

The UniteWomen website states that the group is also endorsed by various other organizations, including Advocates for Youth, Americans United For Separation of Church and State, Code Pink, and Rock the Slut Vote.