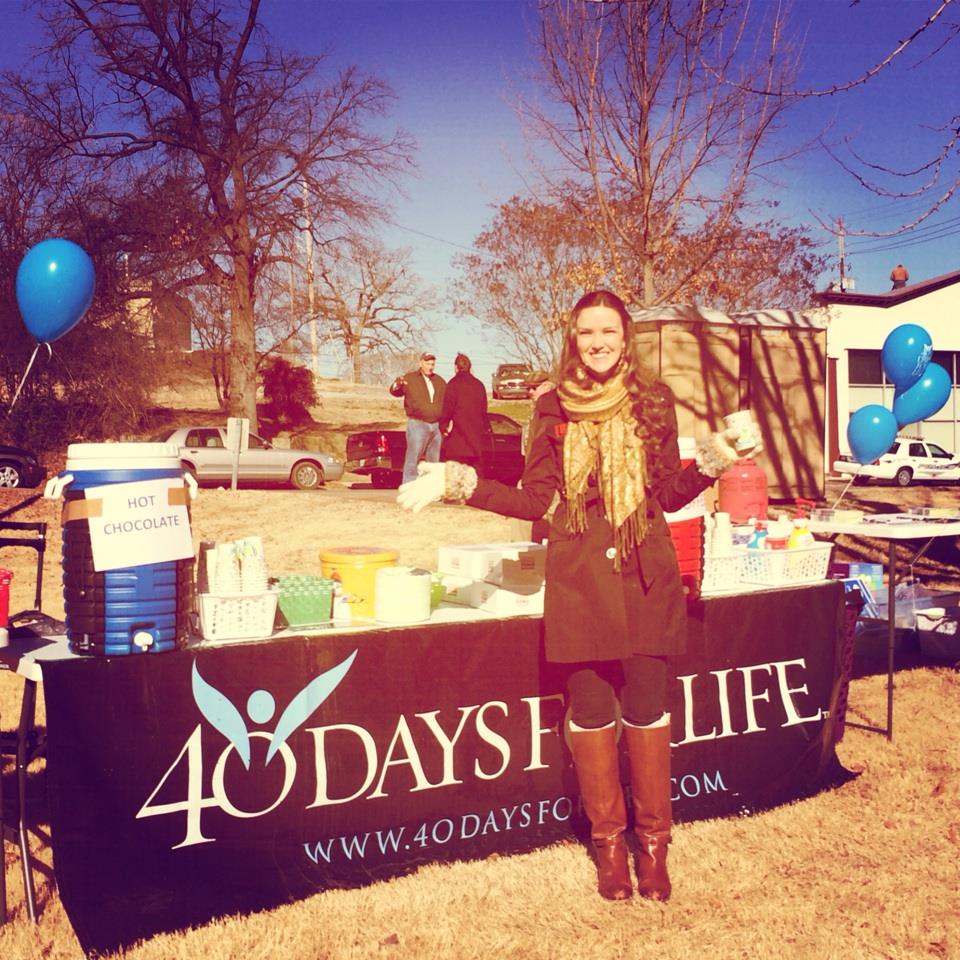 Tucked away in a children’s ministry office at Church of the Highlands in Birmingham, AL, Natalie Brumfield’s sweet voice that engages children to love Jesus almost masks the warrior that lives  to fight abortion—but only for a moment. To know Natalie is to know what being wholly pro-life is.

Natalie is proof that one ordinary person who doesn’t speak before thousands or write best-selling books can make more of a difference for life than many ever will. But her life also reminds us that we can do the same. In her, the extraordinary is formed from an ordinary person who chooses to say yes to the call to life.

For Natalie, her calling to stand for life was ingrained in the fabric of her childhood. Natalie remembers:

“My eyes were opened to a pro-life and pro-choice reality one day after kindergarten. My mom was taking my best friend and I to get a slushy from the gas station on the way home. I saw a bumper sticker on a parked car that said “Pro Choice.” I asked my mom what it meant and she said we should ask my best friend’s mom. That really made us curious so we couldn’t wait to ask her mom. When we did she told us a story about when [my friend] was in her mom’s tummy. There were big complications and the doctors suggested that Jennifer not be born, it’s called an abortion, she said. But her mom and dad decided to not do what the doctor suggested, and she was born with none of the complications that they said she would have! (I realize this is elementary the way I’m explaining it but we were little girls being told this story. They explained people who are for abortion are called pro-choice and people who want the babies to be born are called pro-life. I never understood why the people for abortion had such a happy name… like they are hiding behind it. Imagine being in kindergarten and realizing your very best friend might not have been born. It was one of the most sobering realities of my young life.”

Her childhood wonder was further stirred for life at age 7 when her dad took her to pray in front of an abortion clinic in downtown Jackson, MS, near her home. “I stood holding his hand as we stood across the street,” Natalie says. “My dad was my Mordecai raising me up and telling me I was a difference maker. That my voice mattered to Father God.” But her call to being an advocate for life didn’t end there”

“When I was a senior in high school I had a friend from church and a friend at school who got pregnant. They almost had an abortion but God intervened and they gave their baby boy up for adoption to a sweet family who had been praying for one. The reality of that beautiful baby boy living with a family that celebrates his every breath instead of the dark alternative [struck me]. I knew I always wanted to somehow help life win again and again. I helped lead Jackson’s Biggest Baby Shower that year in my church. I went to several youth groups in our area asking for donations of diapers, baby clothes, etc. for our local crisis pregnancy center.”

Natalie’s life was set from the start to promote a culture of life, and so as an adult she lives that way in virtually every aspect of her life.

She has been the director of the Birmingham Bound4LIFE chapter since 2008, and in the past few years has also been a writer for the national Bound4LIFE blog.  As the leader of the Birmingham chapter, she leads monthly Bound4LIEF prayer meetings outside abortion clinics, as well as other pro-life events. In addition to her work with Bound4LIFE, one of the favorite things to do is work on the  40 Days for Life campaigns in Birmingham. She loves it, she says, because she gets to pray with a variety of members of the pro-life community, including some “incredible people who have been standing for the end of abortion for 40 years. It is an honor to meet people I know I’m standing on the shoulders of in my prayers.”

Natalie puts feet to her prayers even more at the local Sav-A-Life office where she has been counseling at the crisis pregnancy center for the past five years. She says that volunteer job is “an incredible way to love on the women facing crisis–to offer them Jesus, purity if they aren’t married, and pray with them.,” she says. “Of course the center offers classes, resources, baby/mommy closet, and abortion recovery groups. I love the follow up calls later telling me the names of their babies and how much they weigh. It’s such an exclamation mark on what see God doing in our country.”

In 2012, she married the love of her life, Mathew, a man with a deep conviction for life, as well. They have led worship and prayer meetings at the Birmingham Prayer Furnace, which are centered on ending abortion and raising up a spirit of adoption. 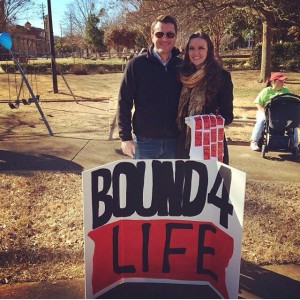 Natalie’s foray from being pro-life as a child to being a pro-life leader as an adult was born out of a Bible study. She was leading a high school girls’ Bible study on intercession. The group of 12-15 girls was learning that intercession could be “fun, outside the box and alive,” she says. She adds:

“One of my main points was that God sends us out from a place of prayer. When we spend time with Him, He shows us what He cares about and we love what He loves. We need to be the answer to our own prayers, as well. We pray and God moves. But He has also called us to move, too.”

Little did she know that was exactly what God would do in her life.

The Bible study focused on three major issues for which they would intercede: human trafficking, missionaries in prison for the Gospel, and abortion. The studies then led to actions, such as a trip to Atlanta after the human trafficking portion, where they visited a  ministry house that rescued girls, both praying and painting rooms in the home. They wrote letters to missionaries imprisoned for the sake of the gospel. Then the turning point came when Natalie searched out a local Bound4LIFE chapter for the girls to join to pray for the ending of abortion.

In that search, she found that the local Birmingham chapter wasn’t active. Natalie found out who the leaders were and says, “I begged the couple to hold [a prayer meeting at an abortion clinic] just for us to show us how they did it. They refused but wanted to meet with me.  Because she thought she could change their minds, she agreed to the meeting. And that’s where everything turned, but not the way she expected.

The couple who’d been leading the Birmingham Bound4LIFE chapter told her she was the girl they had been praying for God to send them. Confused but not wanting to dismiss it if it was God, Natalie told them she needed to pray about it for two weeks.

The couple didn’t know her, but they had mutual friends in leaders of the Birmingham Prayer Furnace, in common, and it was at their house all of them had dinner at the end of the two weeks. There, they asked her why she was so passionate about abortion, and she shared a dream about children she had that had moved her heart. The couple cried, but it wasn’t because of her dream story was so powerful. Natalie recalls:

“The wife was crying and I thought it was in response to the dream being so powerful. But the husband spoke up, ‘That is the same dream The Lord gave me when I first started Bound4Life.’ I was stunned. And I said, ‘Okay, Lord. I think I’m the wrong person for this but I trust you. If you come with me then I’ll do it.’ They prayed over me and commissioned me that night.”

She’s been leading the chapter in Birmingham since that time in 2008. Many days she has stood alone at Planned Parenthood on her lunch hour to continue to pray. Often those from 40 Days for Life come out, as well as members of her Bound4LIFE chapter. They have stood in heat and in cold, on Saturday mornings when many would be out at the lake.

And as Natalie has prayed, and later as the married Natalie and Matthew prayed, prayers for the ending of abortion always led to the spirit of adoption, to caring for the children.

In part 2, we’ll show you how Natalie and Matthew live the call to being pro-life every day, not only in prayers but in actions, and what their future holds in this regard.