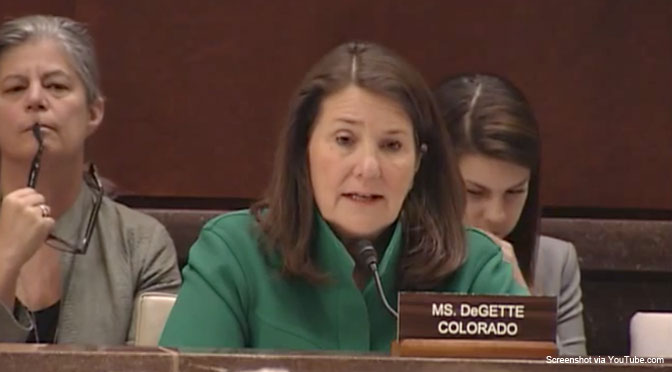 “The strenuous Democratic efforts to fight the evidence, to help those in the industry thwart investigation, and to question the very investigation into fetal organ markets were difficult to ignore.

Democratic members’ strategy appeared to be 1) fight discussion of evidence; 2) say the investigation is too expensive; 3) issue Planned Parenthood talking points against The Center for Medical Progress videos (which were not a topic of discussion at this hearing); and 4) claim that the evidence of fetal organ markets didn’t show fetal organ markets. When shown the drop-down order menu for fetal scalps, for instance, DeGette said it wasn’t evidence of fetal organ markets. This would be akin to looking at the Amazon.com website and saying it doesn’t suggest you can buy books online.”

“Faced with overwhelming evidence of a fetal organ market, the Democrats’ response was to fight discussion of the evidence.

This strategy wasn’t particularly effective at the hearing, but it does show the danger of believing one’s own talking points. An independent audit showed that The Center for Medical Progress videos were not deceptively edited, and Planned Parenthood itself conceded that the statements by its staff featured in the video were not manipulated. But Planned Parenthood supporters (and recipients of Planned Parenthood campaign donations, such as those on the panel) and their allies in the media protested that the videos were nevertheless fraudulent. Their talking point from the very beginning has been that the whole story is made up. Faced with overwhelming evidence of a fetal organ market, the response was to fight discussion of the evidence and then to claim that the evidence didn’t really show what it seemed to show.”