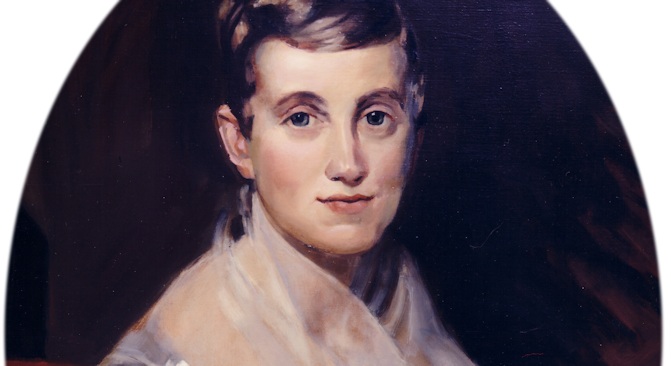 I enjoy history, especially the history of the United States and African-Americans. Imagine my excitement when I realized that the History Society in my city was holding a lecture on the life of Prudence Crandall.

Prudence Crandall is Connecticut’s state heroine. She was a young female teacher in the 1800s who bought a schoolhouse to teach girls in Canterbury, Connecticut. An unmarried woman who held a job, owned property, and educated others was a rare sight in that day. Yet Prudence found favor with the town leaders and educated many of their wealthy daughters. The school was a great success, until a black young woman named Sarah Harris asked Prudence if she could become a student.

Prudence told Sarah she would consider her request. She knew the risk she’d be taking accepting her. Prudence was a God-fearing woman who had grown up in an Quaker family and attended a boarding school run by an abolitionist. In spite of the cost, she chose to accept Sarah into her class. As you might imagine, the parents of the other students weren’t pleased with her decision. They threatened to take their girls out of the school if Sarah wasn’t kicked out. Prudence responded to these threats in a remarkable and surprising way. Instead of asking Sarah to leave the school, she shut her school down. She later reopened it, solely to teach black young women.

Prudence connected with abolitionist William Lloyd Garrison, creator of the anti-slavery paper The Liberator. With the help of Garrison, Prudence traveled through New England, gathering female black students for her class. She found twenty students and brought them to her school. Town leaders were outraged; Prudence was continually harassed and pressured to close the school.

Eventually those who opposed her passed ‘The Black Law‘ to prohibit black students coming from other states to be taught in CT. Prudence ignored the law, continued to teach, and was arrested. After being released from prison, she kept teaching until the night an angry mob of men destroyed the school with brute force. Although the school never reopened, Prudence left CT and continued to stand up for the rights of others, particularly women.

I was intrigued hearing the tale of Prudence’s bravery. The author of a book on Prudence’s life closed his message with a general statement that people are still engaged in fighting for justice. He mentioned the racial tensions facing America today and the battle women are engaged in for “reproductive rights.” That’s when I got upset. It was utterly depressing to think that the legacy of Crandall’s life would be associated with the fight for “reproductive rights” – especially when those “reproductive rights” lead to the death of more black Americans through abortion than any other cause.

I had to approach the speaker. He was a brilliant researcher, writer, and former state senator. After he signed a few books, I asked to have a minute of his time. I thanked him for coming and for working so hard to tell Prudence’s story. I told him I was concerned about the well-being of the black community. I asked if I could tell him about an issue that is devastating our race. He obliged, and I spoke about Margaret Sanger, Planned Parenthood’s founder, and her belief in eugenics.

I gave the statistics on black children killed in abortion and how black women abort more than any other race. I shared my testimony of surviving an attempted abortion. I’m sure I seemed quite intense. It didn’t matter in the moment. I wanted him to know that the fight for freedom for black Americans is connected to ending abortion, not promoting it. I assured him the abolition movement is alive and well.

He politely listened, then told me that Roe v. Wade wasn’t about genocide, but rather about women’s rights. I pleaded with him to research the history behind Planned Parenthood and read Sanger’s writings. “Harriet Tubman is one of my heroes,” I said. “Yet I only know her name because she lived.” He reflectively paused and said, “What is your name?” “Christina,” I said. “Well, Christina, I will look into it. You have piqued my curiosity.”

I pray he kept his word. Prudence Crandall left a great legacy. She fought for blacks to be educated and respected. Those of us in the pro-life movement have an even greater call. We fight for blacks, and those of every race, to live. We are called to be abolitionists for the preborn.