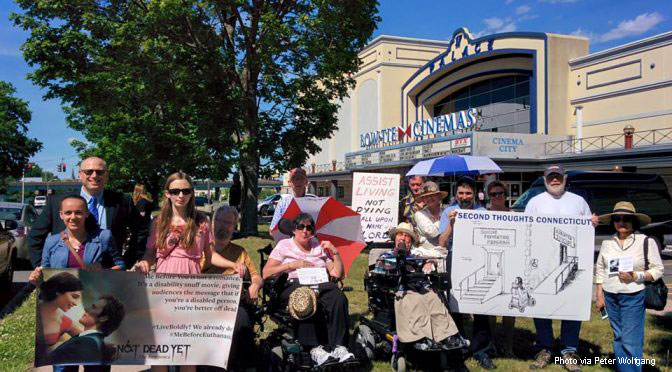 The newest “romance” to hit the big screen has been widely publicized as a film that portrays how to “live boldly” with a disability. But this has people with disabilities as well as disability-rights advocates rightfully upset because in this film – Me Before You – the person with the disability kills himself. Now, as the movie premieres around the world, disability advocacy groups are coming out in full force to protest this inaccurate depiction of life with disabilities.

In the book and the film, the lead character is a wealthy white male who has become paralyzed in a motorcycle accident. He struggles with depression and decides to travel to Switzerland to end his life, leaving his fortune to his caretaker. The premise is causing many to find new and selfish meaning in the film’s title.

Disability-rights groups are protesting the film in cities including Pittsburgh, Baltimore, and London. They are also turning to social media with the hashtag #MeBeforeEuthanasia to show the world how they feel about the film and about the value of their lives.

In Australia, people with disabilities showed up to let moviegoers know that they don’t want pity, and that their lives are worth living.

“It conveys the message that suicide is preferable to having a disability,” Stephen Mendelsohn of Second Thoughts Connecticut told the New Haven Register.

We had nearly 20 of us protesting #MeBeforeYou yesterday in front of Bowtie Cinemas Palace 17 #MeBeforeEuthanasia pic.twitter.com/SUYdXqgKQO

“This is actually the tipping point for the disability-rights community,” he said. “If somebody were to suggest ‘better dead than gay,’ can you imagine the outrage?” Two teen girls protest Me Before You in Hartford, CT. Photo courtesy of Peter Wolfgang.

Mendelsohn notes that Connecticut is the only state with a Suicide Prevention Plan that includes people with disabilities. The plan states that we should “not ‘assume’ suicide is a ‘rational’ response to disability” and we should “develop greater scrutiny of someone’s intentions to die.” He thinks other states should follow Connecticut’s lead.

John Kelly, New England regional director of Not Dead Yet, a disability-rights group told the New Haven Register: “No one’s suicide should be treated [as] noble and inspirational. We reject this discrimination. Our suicides should be viewed as tragedies like anyone else’s.”