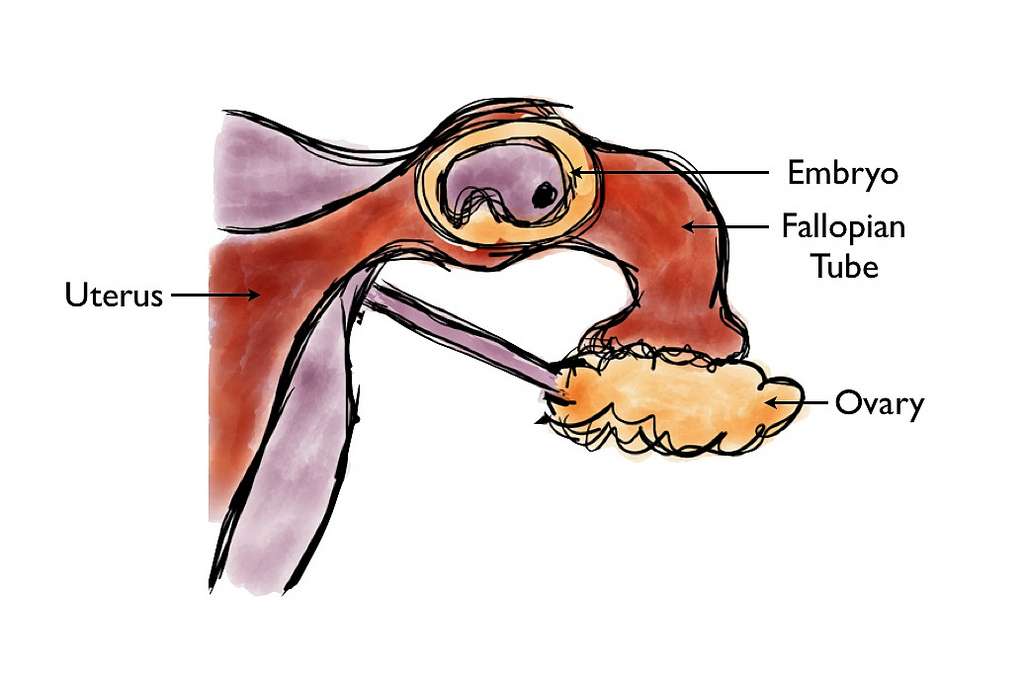 In a 1979 letter, then-Governor Ronald Reagan of California stated, “my position is that interrupting a pregnancy means the taking of a human life. In our Judeo-Christian tradition, that can only be done in self-defense. Therefore, I will agree to an abortion only to protect the life of the prospective mother.”

This could be clarified further: when the mother’s life is in danger, saving her life is the only intention of any medical act. Unlike the purpose of an abortion, ending the baby’s life is not the goal even if it happens incidentally, such as in the case of treating some ectopic pregnancies. In an ectopic pregnancy (1-2 percent of pregnancies), the embryo gets lodged outside of the uterus, usually in the fallopian tube. The fallopian tube is a highly vascular area that needs to be cleared in order to eliminate risk of hemorrhage. Pro-life OBGYN Dr. Donna Harrison (pictured right) tells Live Action News that “in 93 percent of ectopic pregnancies, there is either no fetus at all, or a fetus who has already died.” Dr. W. Colin Duncan of the University of Edinburgh says this is a reasonable estimate, though he suspects that number is higher than 93 percent.

It is, therefore, in approximately 7 percent of ectopic pregnancies that the dilemma of dealing with more than one life at stake enters the picture. Says Harrison:

The mother’s life is in immediate danger, as the pregnancy could cause tubal rupture at any time and in situations of tubal rupture, the mother can bleed to death internally in a matter of minutes to hours.

There is less than a one in a million chance that the mother will survive a tubal rupture and the fetus will continue to live. Given those facts, most pro-life OBGYNs will not hesitate to remove an ectopic pregnancy, in order to save the life of the mother.

The 21st century is blessed with medical technology that makes childbearing safer and less painful for mothers and babies than previous generations experienced. We hear happy survival stories of at-risk pregnancies, such as that of baby Kiera-Drew Burns born at 25 weeks. The ability to keep such young babies alive nullifies the “life-of-the-mother” argument for partial birth abortion, which often requires the mother to go through labor to deliver a baby killed in the womb or left to die at the facility.

There are multiple documented cases of women and babies miraculously surviving ectopic pregnancies brought to term or close to full term.

In December 1990, in vitro fertilization pioneer Dr. Landrum B. Shettles reported to The American Journal of Obstetrics & Gynecology that in 1980 a 27-year-old woman in Vermont had an ectopic pregnancy about 40 days along that was successfully transferred to the uterus with a glass syringe and tubing, and the baby was carried to term and born healthy.

Unfortunately, there is no standard practice developed for performing such an operation on ectopic pregnancies. Perhaps the $540.6 million taxpayer dollars that go to Planned Parenthood would be better invested in research that could save mothers and babies from ectopic pregnancies.  Again Dr. Harrison weighs in:

There is no legitimate research that I know of currently underway regarding repositioning the fetus. There have been internet rumors and some proposals which do not meet ethical criteria for human research,  but none of them are actual research proposals and none that I know of are underway.

Before any ethical research can be done on human beings, there must first be animal research performed which demonstrates that the proposed procedure actually works, and that it is actually safe for both the mother and her embryo.

Being aware of avoidable risk factors is a step women can take in protecting their lives and their babies’ lives from ectopic pregnancy.

Research indicates correlation between increased risk of ectopic pregnancy and previous induced abortion, intrauterine devices (IUD), tubal ligation, smoking, assisted reproductive technology, and sexually transmitted diseases. The increase in ectopic pregnancy in the past couple of decades is suspected to be linked to an increase in the prevalence of STDs, induced ovulation for fertility treatments, and sterilization procedures.