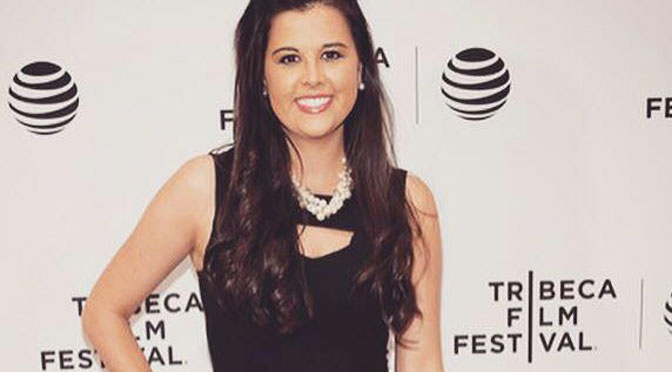 Reagan Nielsen is a passionate, 24-year-old woman who works as the Midwest Regional Coordinator for Students for Life of America. Reagan was raised in a pro-life family and spent her early years outside abortion facilities with her parents.

Later, as a student at the University of Missouri, she noticed how rarely she saw pregnant girls on campus. She knew her classmates were getting pregnant but many either felt abortion was their only option or decided to leave school because they lacked the resources needed to succeed as a pregnant student. Reagan started a pro-life group on her campus to help address that issue. Years later, she now works with 140 groups of pro-life students throughout five states in the Midwest. Reagan recently traveled to New York and walked the red carpet at the Tribeca Film Festival. She was there to view the documentary she’s featured in, Abortion: Stories Women Tell. The film is directed by Emmy-winning filmmaker Tracy Droz Tragos, along with HBO Films. The film’s premise is to tell the stories of 32 Missouri women who’ve been affected by abortion or involved in the movement to advance or abolish it. Abortion: Stories Women Tell is focused on the state of Missouri, which currently has one open abortion facility – a Planned Parenthood in the city of St. Louis. Missouri is filmmaker Tracy Droz Trago’s home state, which is why she chose the location. I interviewed Reagan, who informed me the film makes the case that the 72-hour waiting period for women seeking an abortion in Missouri is a challenge to them. Reagan made it clear that the film has a pro-abortion bias and was “disappointed to see the angle” of Abortion: Stories Women Tell. Reagan was told the film would be balanced and it was sadly not.

“They talk a lot about abortion stories,” Reagan told me. They even found a religious clergy that supports abortion, a minister who told one of his congregants God approved of her choosing abortion. Reagan said, “The real point of the film was to focus on the difficulty of women accessing abortion because of the 72-hour waiting period in Missouri and also to destigmatize abortion.”

Reagan was initially concerned about being a part of the film because she didn’t know what to expect. “I wasn’t sure how we would be portrayed,” she told me. Sadly, the film didn’t give enough attention to the amazing work pro-lifers like Reagan are doing to help pregnant women on campus. However, in spite of her disappointment with the film’s editing and focus, Reagan said she felt like she had to do this film. “I felt confident in myself,” she said. She knew it would be important for a young pro-life person to be shown in the film and respected the fact that they were at least reaching out to include other voices and was grateful she was chosen to share her story.

I asked Reagan if she thought the film would be worthwhile for pro-lifers to watch,  even though it has an obvious bias. She said, “I think it’s worth watching if you go into it knowing there is a slant. I think it’s important for us to recognize what a woman is feeling in her moment of crisis. Sometimes we don’t think about the woman. That woman is hurting and scared. This is the perfect example for us to see where women are at.” Reagan also said it is important for pro-lifers to see both positive and negative portrayals of those who stand against abortion. Seeing the negative portrayals can help us to become more compassionate as a movement. After the film festival, Reagan flew home and had an opportunity to sit next to the abortionist featured in the film on their plane ride. The abortionist recognized her and was impressed by the way Reagan handled herself in the film. There were some pro-life protesters filmed who yelled at women entering abortion facilities. Reagan responded to women differently and the abortionist took note of that. They had an interesting and civil conversation for the entire two-and-half hour flight. Although they didn’t agree on abortion, only God knows what good can come forth from their conversation. Reagan is keeping the abortionist in her prayers and heart.

We live in a world that is full of darkness, but Reagan is a shining light in her generation. Her passion and love exudes through that film and I hope everyone who sees it is moved by the compassion and courage of this brave pro-life woman.