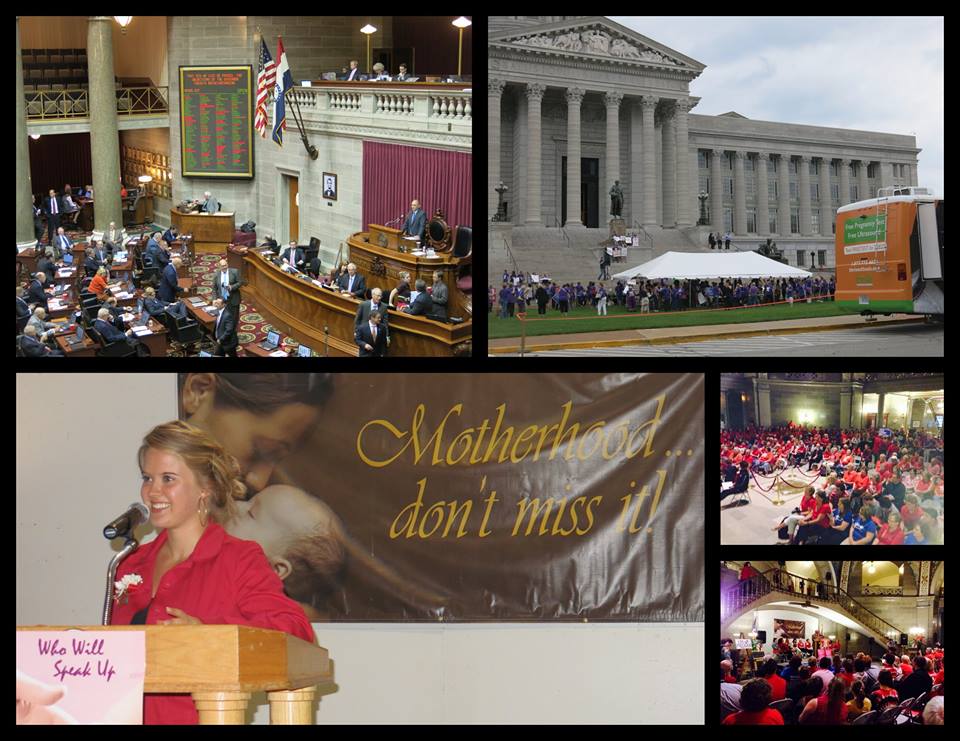 A vote to override Governor Jay Nixon’s (D-MO) vetoes of state bills HB1307 (which requires a 72-hour reflection period before abortion) and HB1132 (which grants tax credits for donations to crisis pregnancy centers, maternity homes, and food pantries) was preceded by a pro-life rally and prayer vigil that celebrated motherhood at the Missouri Capitol.

The event was emceed by Sarah Greek, a communicator and citizen activist who is a radio producer of Eagle Forum Live. On September 11th, Greek wrote on her Facebook page:

I was emceeing the pro-life rally when we were interrupted by dozens of shouting abortion activists, who tried to drown out our speakers (which included a pregnant woman, a former abortion clinic manager, and several rape survivors) and make their way up to the stage.

A row of people in the audience blocked the protestors as the crowd chanted friendly pro-life cheers.

After police escorted the protestors out, we carried on. The Speaker of the House came down and assured us they would pass the bills. The crowd was ecstatic. Tense debate continued into the night in both the House and Senate.

And this morning, the world woke up to the news that Missouri overrode the Governor’s vetoes and passed what Planned Parenthood considers the 2nd-most restrictive abortion law in America.

Greek told me via e-mail that she thought the abortion activists “began shouting about 10 minutes into our program.” Pro-life activists clothed in red drowned them out with chants like, “We love babies, yes we do. We love babies, how about you? We love women, yes we do. We love women, how about you?” The loudest chants were led by teenage students from schools across the state, according to the St. Louis Review.

This legislative victory in the “Show-Me” state goes to show the power of vigilant citizens who exercise the checks and balances of federal republican government to the fullest!