Despite being dubbed a “Super Bowl Session,” Texas legislators have ended their 86th session on a disappointing note, passing very few of the pro-life bills brought to their attention. While Republican lawmakers celebrated their efforts at property taxes and school finance reform, at least one pro-life group believes more should have been done in the way of pro-life legislation.

The failure to pass pro-life laws at a time when other states around the country have made sweeping bans against abortion seems puzzling, especially as Texas Lt. Gov. Dan Patrick just claimed, “We are clearly the most pro-life state in the country.” The legislative track record during this last session has caused some pro-lifers to question Patrick’s claim. As the Star-Telegram noted, “Texas Republicans this year have conspicuously stayed on the sidelines. They’ve instead let other conservative states lead efforts squarely aimed at the Supreme Court’s 1973 Roe v. Wade decision that legalized abortion.”

Notably, it appears that representatives in the House failed to act on several bills which passed the Senate. Pro-life legislation that ultimately died included the following: 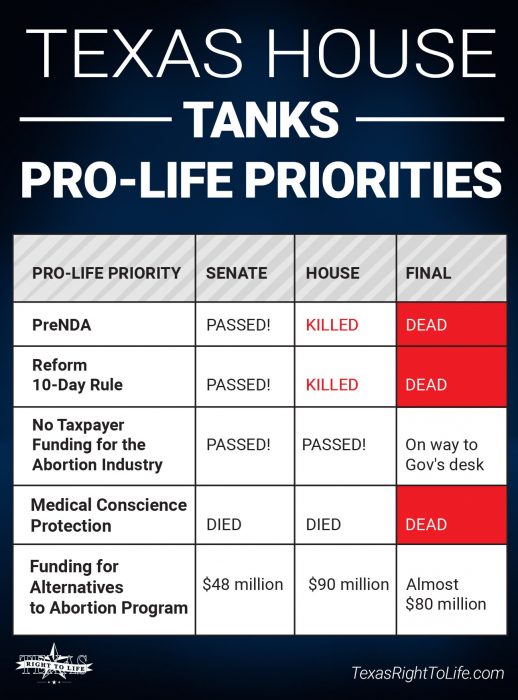 In a statement, Texas Right to Life conveyed its belief that legislators were too busy shoring up support for next year’s election to care about the important issues at hand. But House Speaker Dennis Bonnen slammed the criticism of the pro-life organization, telling reporters, “They aren’t worth responding to. If we passed every pro-life bill filed in the history of the state, they would say we had not done enough. You will never please or appease those folks and I’m sure as hell not going to waste my time trying.”

While many pro-life bills failed to pass, there were some smaller victories worth noting. SB 22, which prevents taxpayer funding of Planned Parenthood or its entities passed both the Senate and the House and is headed to Gov. Gregg Abbott, who is expected to sign. HB 16, the Texas Born-Alive Infants Protection Act, provides protections to those infants who are abortion survivors. While these are undoubtedly victories, many still wonder what caused Texas pro-life legislators to refuse to act on so many important bills at such a critical time in our nation.