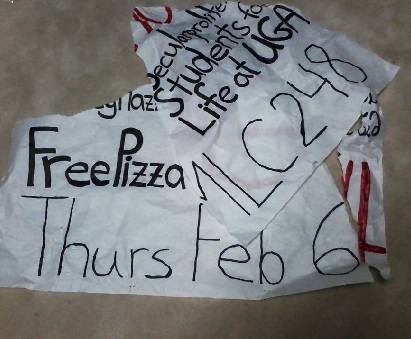 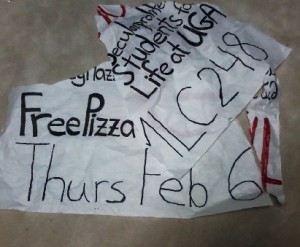 Along with pro-choice sentiments usually comes vitriol from those who harp on the legality of abortion and sometimes do it by denying pro-lifers things like First Amendment rights.  This is especially true on college campuses.

Recently, at the University of Georgia, pro-choice miscreants did just that.

Vandals attempted to block a pro-life club from advertising an event featuring Kelsey Hazzard, the president of the national organization Secular Pro-Life.  Hazzard is an anti-abortion activist known for presenting nonspiritual arguments against abortion.

The name of the scheduled event: “Pro-Life Without God.”

I am bringing Kelsey Hazzard to campus in order to shatter stereotypes about who is pro-life. I also want to make people realize that abortion, as a human rights issue, can be opposed on secular grounds.

Somebody on campus disagreed with Ms. Stapleford’s idea to “shatter stereotypes” through intellectual debate, so they took it upon themselves to make the decision for University of Georgia students who might otherwise be interested in attending.

In hopes of thwarting attention, the posters advertising the pro-life event were destroyed.

Sophomore Elizabeth Ridgeway, a writer for the student publication The Arch Conservative, expressed her frustration about the pro-life group being denied the right to exercise their freedom of speech and expression to The College Fix.

Ridgeway explained that while waiting at a bus stop she saw a “hooded figure” tear down one of the posters.  Ridgeway said, “He tore the banner down, crumpled it up, threw it in a nearby trashcan, and walked away.”

Let’s remember, crumpling up and throwing in trashcans is what pro-choicers like to do.

When asked about the vandalism, UGA spokesperson Tom Jackson said that while he did not know the facts about pro-life posters being sabotaged, “it is apparent that no one should be destroying notices properly posted by someone else.”

For context, damaging pro-life displays is not unique to the University of Georgia.  Similar incidents have taken place at other bastions of free speech like University of Chicago, USC, Ohio State, Princeton, and Harvard.

There must be something about the sanctity of life that inspires some of those who want the right to destroy the unborn to also display vicious behavior.

Student’s for Life president Rebecca Stapleford also took time to  speak with The College Fix, a publication that prides itself on providing “A Daily Dose of Right-minded News.”

Rebecca said that she kept “putting the posters up … and someone [kept] taking them down,”  she would  “put them up, go to class and within an hour [they’d be] gone….put them up again, and within five minutes…gone.”

That’s why it’s no surprise that the Secular Pro-Life event posters have disappeared from all over campus, including dorms and bus stops, which means that more than one person had to see the “hooded figure.”

Ms. Stapleford told ‘The Fix’ that in the past her group put up “graphic image displays” that also were  “targets of vandalism.”  Those displays were “almost always stolen,” so Rebecca said Students for Life doesn’t bother with the displays anymore.

Discouraging pro-lifers from exposing the truth is exactly what pro-choice hooligans hope will happen.

The “Pro-Life Without God” speaker Kelsey Hazzard said this is the first time such widespread defacement has preceded her appearance at an event, but she’s not surprised.

The abortion movement is frustrated that the pro-life message is gaining ground, particularly among college-aged people. Some have, unacceptably, let out that frustration by attempting to censor their pro-life classmates.

Either way, what the University of Georgia situation proves again is that whether it’s the message of the God-given sanctity of life or an argument in favor of human rights, persons determined to destroy the unborn will go to great lengths to prevent those who might be swayed from hearing the truth.