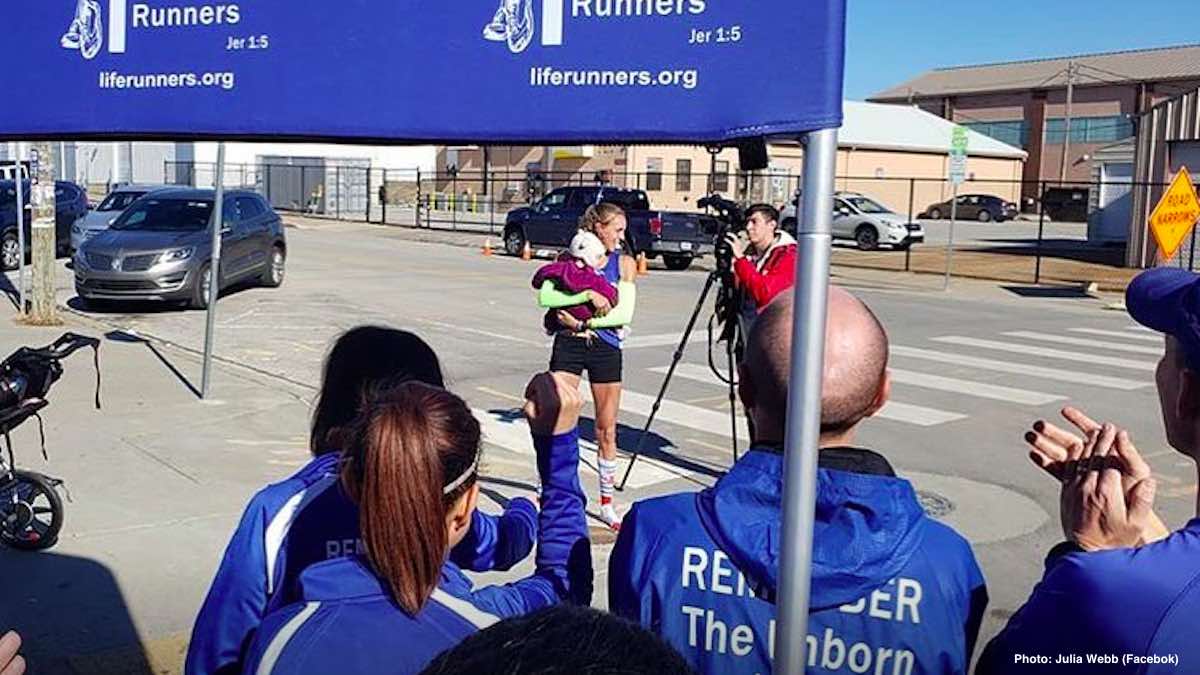 Julia Webb of Arkansas may have just set a world record. The pro-life mom of three recently won the Route 66 Half Marathon female category with a record-breaking time of 1 hour, 21 minutes, and 23 seconds. But she didn’t do it alone — she set the record while pushing her 10-month-old daughter in a stroller in the Tulsa race.

Webb has loved to run all her life, including through her pregnancies. “Some women might fear that if they have children it will hinder their ability to accomplish goals, but I really believe if it’s something you love to do you can involve your whole family in it,” she said to ABC News. “If I didn’t have running I wouldn’t be as good of a mom. The more I compete, the more joy I get and the more joy it brings to my children.”

Not only is Webb achieving her dreams with her children along for the ride, she’s also taking a stand while doing so. Webb is a member of LIFE runners, the largest pro-life running group in the world.

“The decision to join Life Runners was not easy,” she said in a Facebook post. “For most of my life I never wanted to stand up for anything. I wanted to be agreeable with everyone and everything,” but in 2016, she said, her husband had a conversion and “has challenged me on every level ever since.”

The challenge, she says, has been worthwhile. “The issue of abortion needs more people to stand up…. A lot of people don’t really know what they’re getting themselves into… that they regret,” she told FOX News. “I would love to see LIFE Runners continue to grow and if it can save one woman from getting an abortion it will be worth it.”

Her husband Alan, who holds the American record for fastest mile at 3:46.91, is also active with LIFE runners.

As if to underscore Webb’s relationship with running, her family, and the preborn, Webb said her next goal is to run in the 2020 U.S. Olympic Team Trials for the Marathon, something she qualified for while five weeks pregnant with her daughter, Gabby.

As Julia moves forward smashing records, her faith and her family keep her grounded. “I feel called to be a witness to Christ. There are days I am dragging and want to hide behind a Nike logo but it’s time for me to be uncomfortable. Standing up for the littlest in society matters.”