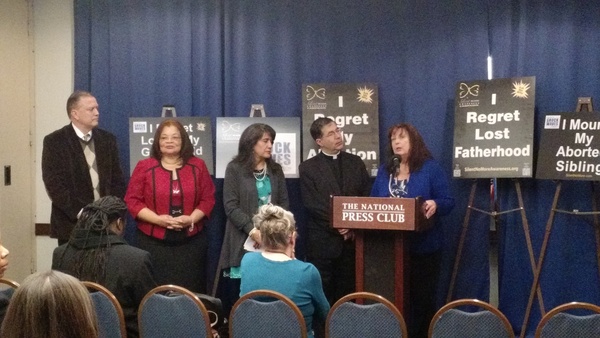 It’s not just a child and a mother who are devastated by abortion.

Priests for Life and the Silent No More Awareness Campaign held a press conference yesterday at the National Press Club in Washington, D.C. announcing the unveiling of “Healing the Shockwaves of Abortion,” a new initiative to reach out to those affected by the killing of children in the womb.

The year-long “Shockwaves” program expands, through interviews, educational resources, and personal testimonies, the popular understanding of who exactly is wounded when an abortion takes place.  In addition to post-abortive mothers, the organizers will tell the stories of grandparents, siblings, and spouses – and even abortionists, abortion workers, and pro-life advocates.

Regarding the latter groups, Fr. Frank Pavone said that with medical technology making ever clearer the reality of human life in the womb, the need for healing for abortion workers is all the more necessary.  These people are “conflicted,” “tormented,” “resentful.”  He cited as an ally Dr. Anthony Levatino, an ex-abortionist who forsook the practice shortly after seeing his own daughter struck and killed by a car.  Levatino has testified multiple times in favor of the Pain-Capable Unborn Child Protection Act, recently reintroduced in the new Republican Congress, citing his own gruesome work committing second-trimester abortions.

“If you have any heart,” Levatino said in a statement read by Pavone, “it affects you.”

Additionally, Pavone said, sidewalk-counselors and other pro-life advocates need healing when they fail to save a life. Kevin Burke and Dr. Alveda King described how abortion ravages the black community.  Burke mentioned that his work at one maximum-security prison in Florida revealed that 90% of inmates he spoke to had taken part in an abortion decision (i.e., facilitated a mother in the destruction of their child).  Many prisoners told him that their complicity in the deaths of their sons and daughters caused their descent into crime.

King, when asked by a reporter about how abortion relates to the #BlackLivesMatter hashtag campaign, responded pithily.  Quoting Sheriff David Clarke of Milwaukee County, Wisconsin, she said, “#BlackLivesMatter if you stop aborting black babies.”  She elaborated, “If you’re gonna target one group of human beings because of skin color, and do genocide and eugenics, it’s going to be very apparent that human life is devalued. … We believe that abortion is a very violent act in the womb of a woman, hurting another human being.”

Pavone had strong words for two groups abetting abortion in the United States: politicians and pastors.  Regarding the first, “[n]o public official claiming to serve those he or she represents can ignore the damage abortion is doing to everyone.”  Regarding the second, “[t]here are many pastors with blood on our hands – because we were silent.”

“Why is it that the other side has to work so hard to destigmatize abortion?” Pavone concluded.  “The problem here is rooted in the very fact of what an abortion is.  Human nature rejects it.”  Georgette Forney echoed him, explaining why pro-abortion “destigmatizing” efforts like the 1 in 3 campaign are doomed to founder: “It’s hard to find a woman willing to carry a sign that says, ‘I’m glad my child is dead.'”

“Shockwaves” will officially launch in Washington, D.C., on January 22, at the March for Life.

This article is republished with permission and originally appeared at American Thinker.