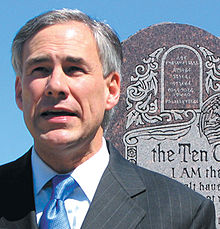 Greg Abbott, former Texas Attorney General, has won his election in Texas and will succeed fellow pro-lifer Rick Perry as Governor of the Lone Star State. Abbott, who ran against radical abortion supporter Wendy Davis in the race, has a decade-long history of defending life as a legislator, which bodes very well for the future of pre-born Texans and their mothers.

In addition to defending Pro-Life laws passed by the Legislature, he has helped ensure that women have full access to health care services at agencies that are not sullied by affiliation with abortion. Not only does Attorney General Abbott’s record show his concern for pregnant women, but also his record of protecting all women from the predatory abortion industry is clear. He is the type of leader and statesman on whom we can depend.

With Abbott’s win, Wendy Davis and her infamous pink running shoes are likely to disappear from the spotlight. In addition to being strongly supportive of abortion, Abbott’s opponent also attacked the governor-elect on multiple occasions for being disabled — and neither strategy sat well with voters in the largely pro-life state.