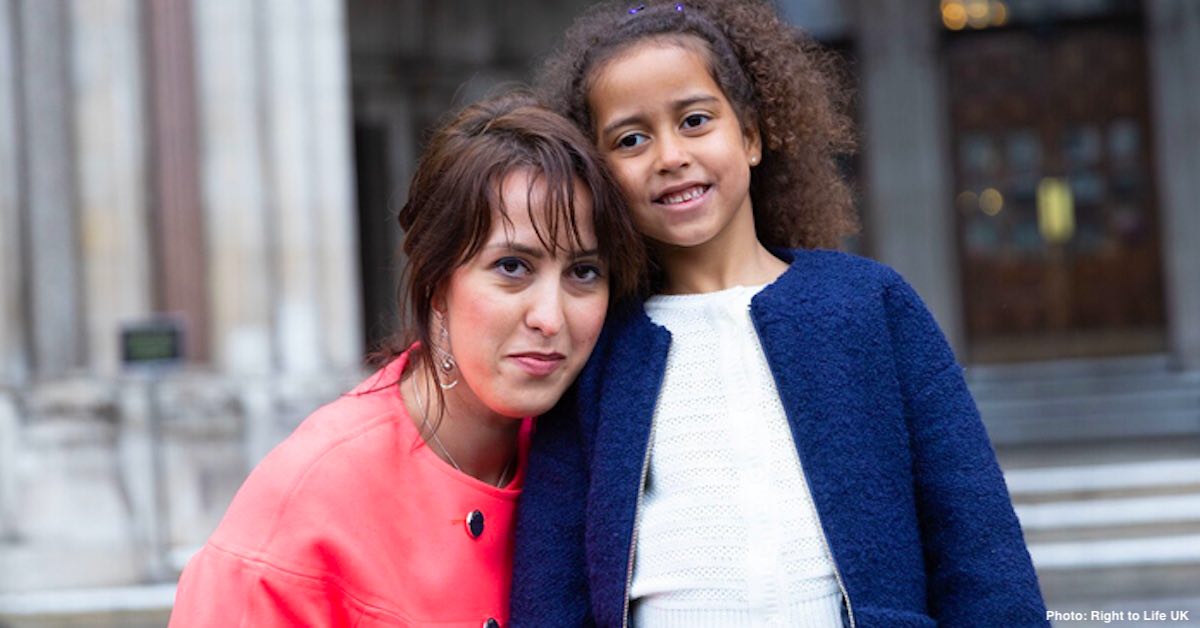 (Right to Life UK) The use of criminalised free speech zones (‘buffer zones’) around abortion clinics will be challenged at the European Court of Human Rights (ECHR), by a mother who received pro-life help the zones criminalise.

Alina Dulgheriu had wanted to challenge the criminalised free speech zone after receiving support from pro-life campaigners outside an abortion clinic several years ago – support which led to her keeping her unborn baby, Sarah.

Alina launched a legal fight against the Council’s Public Space Protection Order in April 2018 because she wants other potential mothers to receive the same help she was offered, and because it prevents the help some women need to escape an unwanted or coerced abortion.

The High Court accepted that her rights to freedom of expression and freedom of assembly had been infringed, but ultimately upheld Ealing’s criminalised free speech zone.

The Court of Appeal had granted permission for the challenge to be appealed, but also sided with Ealing Council in a ruling last year.

The UK Supreme Court’s refusal to hear Alina’s case means her only legal option is to take her case to the ECHR.

Today, it was announced, Alina’s legal team are working on her application to the European Court of Human Rights, which marks the final court of appeal for her case. ECHR judgements affect around 800 million people across Europe, including the United Kingdom.

Before it had been displaced by the criminalised free speech zone, the pro-life demonstration outside the MSI abortion clinic in Ealing had seen more than 500 women accept an offer of help which led to them choosing to keep their baby rather than have an abortion.

Additionally, in 2017, the Commons Home Affairs Select Committee heard that there was no probative evidence to suggest women were being harassed outside abortion facilities, whether in Ealing, Portsmouth, Birmingham, or elsewhere in the country.

In contrast, the Be Here for Me website tells just some of the many stories of women who have been helped by people outside abortion clinics – including some of mothers from Ealing.

In a similar case, a PSPO passed by Richmond Council has been challenged by Justyna Pasek, who has personally supported women visiting the abortion clinic in Richmond for over five years.

Last year, the Mayor of London Sadiq Khan reiterated his support for criminalised free speech zones. In 2018, he claimed that those living in London would be “deeply disappointed” over the then Home Secretary’s decision not to roll out ‘buffer zones’ nationwide.

Meanwhile the former Home Secretary, Sajid Javid, chose not to introduce nationwide criminalised free speech zones. He said that such a move would not be proportionate in light of the ‘passive’ nature of activities outside of abortion clinics, as well as the existing powers of local councils and police.

Prominent human rights campaigners, including those who would describe themselves as pro-abortion and ‘pro-choice’, seem to agree. A number of them have expressed their concerns about the ease with which the use of criminalised free speech zones allow councils to override basic human rights law.

Alina’s case can continue because of the many donors who have contributed over £65,000 to her legal fund.

“My little girl is here today because of the real practical and emotional support that I was given by a group outside a Marie Stopes centre, and I am going to appeal this decision to ensure that women do not have this vital support option removed.

“I will continue to stand up for the women whose voices have been sidelined throughout this process and for women who need life-saving support today but cannot get it.

“Ealing Council could have taken action in a way that would have protected women and safeguarded the essential help offered at the gate. Instead, they criminalised charity and attempted to remove dedicated and caring individuals from public space without justification.

“It is very clear that many are opposed to Ealing’s ban on peaceful and charitable activity, and like me, they want to see support available to vulnerable women where it is most needed.

“I cannot imagine a society where a simple offer of help to a woman who might want to keep her child is seen as a criminal offence. I refuse to accept that women should be denied the opportunity to receive help where they want to keep their child.”

Elizabeth Howard, Be Here For Me spokesperson said:

“Eight years ago, Alina Dulgheriu found herself jobless, homeless and alone after an unplanned pregnancy. She’d been fired from her job as a live-in nanny and abandoned by her boyfriend.

“She went to Marie Stopes to get advice on her options, but all they could offer her was an abortion. She didn’t want that but didn’t know where to turn.

“Her life was changed when she met a pro-life volunteer at the gates of the abortion centre who told her that she did have options, that there was help available, and that she could keep her baby if she wanted.

“She accepted the offer of help and her daughter Sarah was born. She is now seven years old, a beautiful, lively and beloved child.

“Ealing Council has banned pro-lifers from helping women like Alina. Alina has challenged their decision in court, but three times the courts have ignored her story.

“In five years of the pro-life vigil’s work in Ealing, more than 500 women accepted an offer of help and chose to keep their baby rather than have an abortion. These women have tried again and again to have their voices heard, but they are ignored.”

Clare Mulvany, Be Here For Me spokesperson said:

“The mothers of Be Here for Me are angry that their own experiences, and the help they have sought to pass on to others in their shoes, have been ignored and denied.

“No one can claim to uphold a right to choose whilst supporting the stripping away of all but one choice.

“These women and their powerful stories must be made more visible.

“We understand that she intends to appeal and she has our full support in this”.