A day after the news broke that select Indiana and Kentucky Chili’s restaurants would offer a promotion to donate 15 percent of customers’ food tabs to Planned Parenthood, pro-life backlash brought the promotion to a grinding halt.

Various pro-life media outlets reported Wednesday that some restaurants in the two states would donate proceeds from the promotion to Planned Parenthood of Indiana and Kentucky. And when pro-lifers got wind of this, the response was swift and furious. 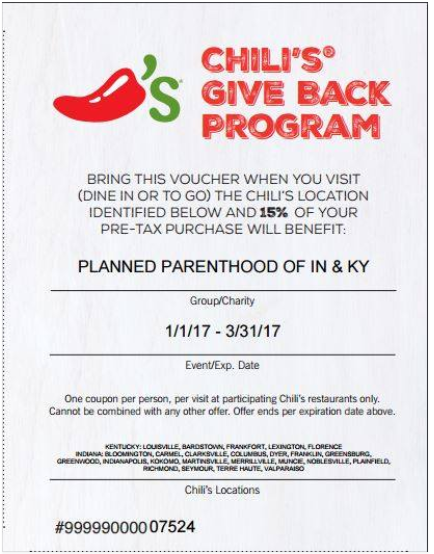 While the promotion was one that would only receive donations from those who elected to bring in the voucher, that didn’t matter to its customers on the restaurant’s Facebook page: 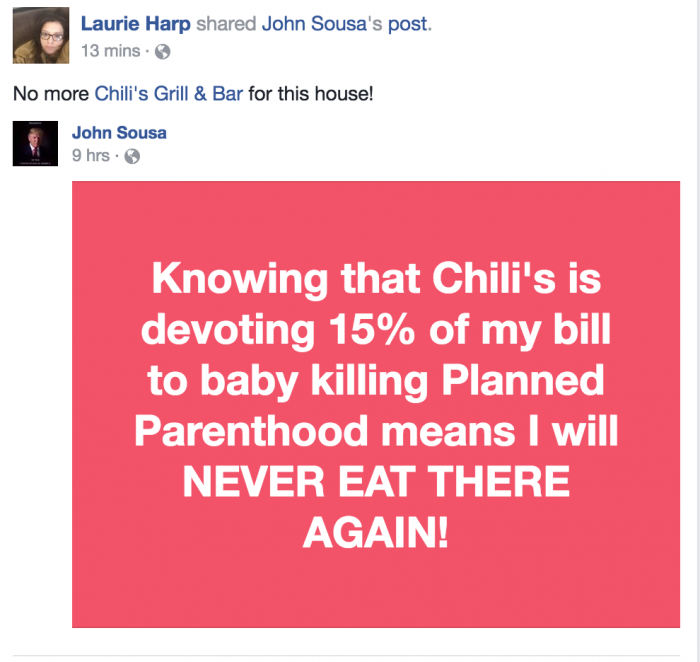 And even after the promotion was pulled, some posted they had enough: 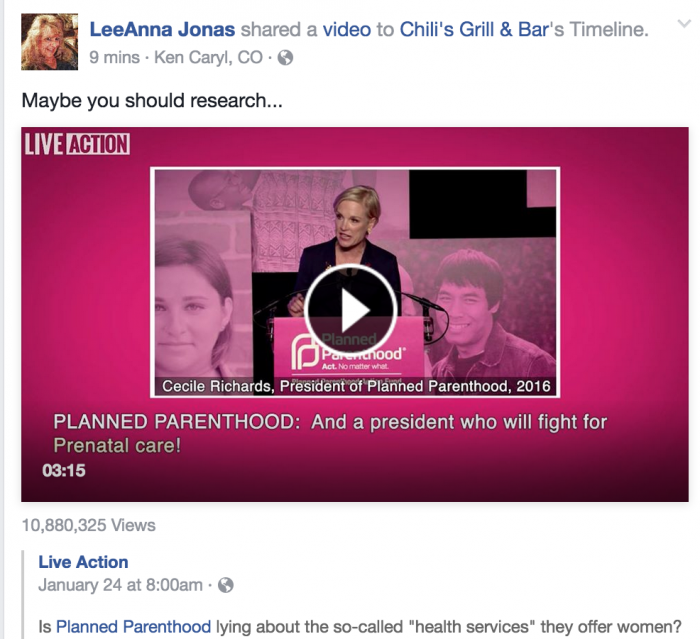 Comments like these, and many others, prompted the restaurant to pull the promotion. The Blaze reported on Chili’s statement about stopping the promotion, blaming it on an “independent franchise,” but using its corporate authority to cancel it. Chili’s said:

At Chili’s, we have a longstanding history and take pride in giving back to unite our local communities together. We recognize every community is unique, and encourage our restaurant managers and franchise partners to support causes that help bring communities together and leave a positive impact on our valued Guests, neighbors, friends and families we serve.

Yesterday, we learned that an independent franchise partner of Chili’s in Indiana and Kentucky made the decision to host a Chili’s Give Back Event on behalf of Planned Parenthood Indiana and Kentucky. While our franchise partner had the best intentions; we have received growing feedback and concern from community members regarding the Give Back Event. This feedback does not reflect Chili’s focus on bringing communities together and the event was never intended to be viewed as a partisan event or political statement, therefore we, along with our franchise partner, have decided to cancel the event.

We will more clearly communicate the focus of Chili’s charitable giving efforts, so that our restaurant managers and franchise partners can feel empowered to support local organizations that bring communities together.

The implication Chili’s corporate office statement makes in its conclusion is that Planned Parenthood is not an organization that brings communities together; instead, it divides communities. Chili’s in Indiana and Kentucky found that out the hard way, and though the promotion has been canceled, the backlash continues to stream the Chili’s Facebook wall.

It’s a reminder to Planned Parenthood that mainstream America doesn’t find running a business focused on killing preborn children a worthwhile charity endeavor, despite the pink pictures and positive spin. It’s also a lesson to other businesses that the general public doesn’t want its hard-earned money going to an abortion chain, whether it comes from tax dollars or restaurant receipts.