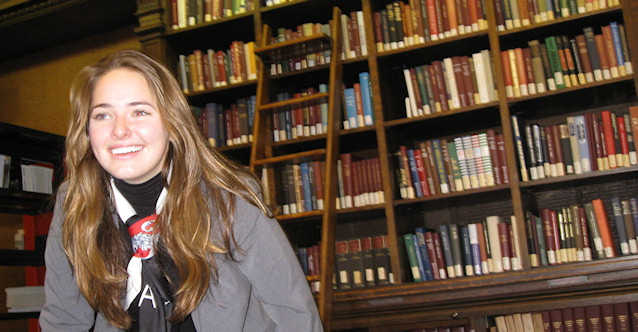 While the pro-life view is not always popular in academia, especially at Ivy League institutions, some young people are setting out to change that. While raging pro-choice activists have had their run of the mill for some time, motivated pro-life students are now on the move.

While the pro-life view is not always popular in academia, especially at Ivy League institutions, some young people are setting out to change that. While raging pro-choice activists have had their run of the mill for some time, motivated pro-life students are now on the move.

Harvard University sophomore, Aurora Griffin, is compelled by her Catholic beliefs to be an outspoken advocate for the unborn. As Vice President for the Harvard Right to Life, Griffin has her finger on the pulse of this issue. In an exclusive interview, she gives us a glimpse of the current attitude towards abortion:

EF: You mentioned that you are acting as Vice President of Harvard Right to Life. What exactly does that entail?

AG:  That involves any number of responsibilities. We write articles, coordinate speaker events, do postering on campus, etc. But a big part of what we do is meet together and sharpen each other’s skills. So we do a lot of current research. We want to stay up on the debate, being prepared to give a good defense, and reasons for why we believe what we do.

EF: Now, you often write some pretty touchy articles on conservative political positions, for The Harvard Crimson. What kind of discussion does that generate? Give us a good idea of what the feeling towards the Pro-life movement is on campus.

AG: Well, because Harvard is so far to the left institutionally, it is evident that it will take a lot longer for pro-life to be the dominant position. But we are really encouraged, that on a national level the situation is looking a lot more positive.  So while the view of academia are often out of touch with reality, that will not always be the case.

So, internally we work with a very encouraging group of people. Harvard Right to Life is very motivated, but the battlefield always happens on The Crimson website. There is a lot of animosity towards hot-topic political issues. But while writing about abortion can make people very angry, what actually makes people more angry is writing about traditional marriage. So, it’s really the lesser of two evils.

EF: From your experience, what do you feel is the most effective method of getting the pro-life message across, at Harvard?

AG: It really has to do with how you approach the issue… You aren’t contributing to the conversation if you just tell someone “If you sin, you are going to hell.” You really have to listen to other perspectives, have academic integrity, while being able to disagree with them firmly and in a friendly way. It is more about presenting another side. People who are honest actually appreciate that.

I definitely have written articles and engaged with pro-choice arguments on an intellectual level, but at the end of the day, this is not a philosophical problem. It’s not a head thing it’s a heart thing. It’s important to have truth out there, but the more important part is engaging personally, and trying to change hearts on the subject.

EF: How would you encourage other students who feel ostracized, or discouraged about their conservative voice?

AG: We have to remember, we have the most important thing on our side: that’s the truth. Life is tough, but the truth will go out. People are starting to see that. The thing about the pro-life movement is that it has been out for a long time…In the beginning, on the national scale the pro-life position used to be abhorrent.  Only the “right wing fringe” of people agreed with it. That is not the case anymore.  Roe v. Wade is on its way out.

EF: So, as a proactive voice at Harvard, you feel that the pro-life movement on the upswing?

AG: 100%. I would say I think the first thing that’s important to remember, is that this is a winning battle. We are on the side of life, and we will win. We can’t ever forget that. While that is the case, it’s important to say, fight the good fight, but be smart about it.  Ultimately, this is not a religion – not about whether or not you are a Christian; this is something we want everyone to be on the same page about: the right to life!