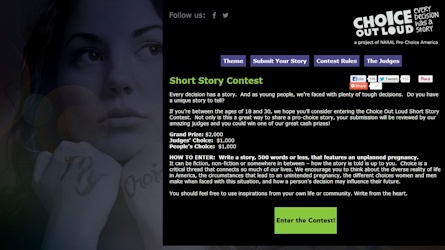 Once upon a time abortion was a secret, an act that didn’t promote glory or pride; few celebrated killing a baby even when they thought somehow it was the right choice But as the pages of history turn we see abortion glorified as a subject of personal victory. To that end, NARAL Pro-Choice America and NARAL Pro-Choice America Foundation have been sponsoring a writing contest—about celebrating the choice of abortion. 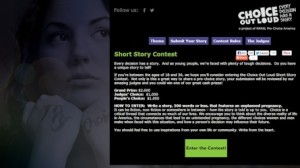 “Choice Out Loud: Every decision has a story” isn’t so much about every decision because NARAL is about promoting abortion propaganda through the vehicle of “literature.” Odds are a choice where the writer was considering abortion and ended up celebrating life wouldn’t get a second look from the judges because, while it doesn’t say it’s a pro-abortion contest, NARAL is one of the most vocal pro-abortion  organizations in the nation. If Planned Parenthood has a BFF, it’s NARAL. A writing contest from NARAL is a writing contest to promote abortion.  From the Choice Out Loud page:

If you’re between the ages of 18 and 30, we hope you’ll consider entering the Choice Out Loud Short Story Contest.  Not only is this a great way to share a pro-choice story, your submission will be reviewed by our amazing judges and you could win one of our great cash prizes!

It can be fiction, non-fiction or somewhere in between – how the story is told is up to you.  Choice is a critical thread that connects so much of our lives. We encourage you to think about the diverse reality of life in America, the circumstances that lead to an unintended pregnancy, the different choices women and men make when faced with this situation, and how a person’s decision may influence their future.

You should feel free to use inspirations from your own life or community. Write from the heart.

If your pro-abortion heartfelt writing wins, there’s prize money—enough to pay for a few more abortions. And those “amazing” judges? Some young voices promoting the right to kill babies.

Perhaps most ironic about the inbred contest is the rule list, which includes this phrase:

“Submission must not promote racism, bigotry, hatred or physical harm or harassment of any kind against any group or individual.”

Apparently physical harm to the unborn is excluded or the contest itself could not exist, for no abortion ever takes place without the promotion of physical harm.

Additionally, the contest notes that, “Submission must be suitable for publication (i.e., may not be sexually explicit, obscene or indecent).”

The idea that ripping a baby from the womb isn’t obscene or indecent is a stunning portrayal of the way we have turned the pages of human history, calling evil good—and even awarding prize money and accolades for fictionalizing it.

The NARAL contest is simply an inbred abortion propaganda device that actually violates its own rules by promoting physical harm, obscene acts and indecent behavior—in the name of the glory of personal choice.

It seems that even those who would support abortion would not want to publicly celebrate the act of death. The abortion industry, however, isn’t about anything but death. Their feeble attempt at promoting abortion literature once again shows their single-minded focus toward keeping the instant death recipe alive.